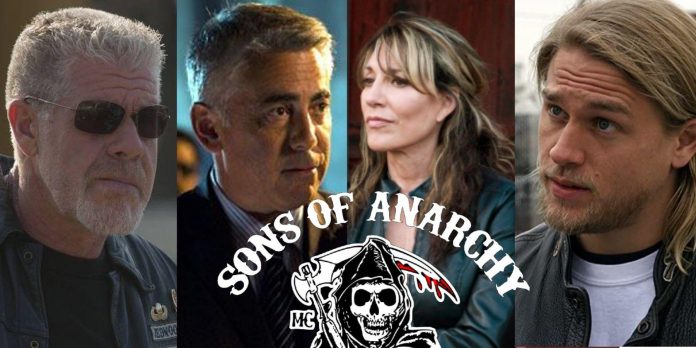 In its seven-season run, Sons of Anarchy is filled with memorable moments. Its intense pace and troubled characters provide plenty of intrigue. The success and interest in the series inspired the spin-off Mayans M.C., which is currently in its fourth season. Both series were created by Kurt Sutter, who made sparring on-screen appearances as Otto Delaney, an imprisoned member of the SAMCRO club. Sutter’s other accolades include penning the screenplay for the 2015 film Southpaw which starred Jake Gyllenhaal, Forest Whitaker, and Rachel McAdams.

Throughout its tenure, Sons of Anarchy included endless wars amongst the various gangs operating in Charming, California, and the surrounding area. SAMCRO, the series’ focal motorcycle club, facilitates many firearm exchanges, though not all members are on board with their course of action. Over the course of the series, the tension between the members of SAMCRO, the secrets they keep from one to stay loyal to another, and the feuds with other clubs and gangs result in a never-ending cycle of violence that leaves many paying the price with their lives.

There is something to appreciate in every season of Sons of Anarchy, but its second season is often rightfully considered its best. In comparison to Sons of Anarchy’s first season, the pacing and construction of its narrative are much cleaner, which provides for much more effective twists. As if the grim ending of the first season of Sons of Anarchy wasn’t enough of a suggestion that its second season would be even more gruesome, the season quickly proves it. Part of the success of season 2 is its ability to weave a number of storylines together in a meaningful way. As the secrets amongst some SAMCRO members create friction between them, the arrival of the League of American Nationalists (L.O.A.N.), and the repercussions of their ties to the IRA elevate what punishment in their line of work looks like.

Season 2 is where the cracks within SAMCRO become more evident. Already aware of his late father’s dream to make the club legitimate, charter Vice President Jax Teller (Charlie Hunnam) finds himself wanting the same. He no longer wants to be engaged in the dangerous gang wars that always result in tremendous bloodshed, nor the unimaginable sacrifices some of them are forced to make. Naturally, not all members of the club are on board with this idea, and the most obvious of them is the charter President Clay Morrow (Ron Perlman), who is also Jax’s step-father. In season 2, Jax and Clay’s inability to see eye to eye cost both men severely, and the other members of SAMCRO are caught in the lethal crosshairs.

The villains of season 2 are among Sons of Anarchy’s most terrifying. Viewers first meet Ethan Zobelle (Adam Arkin) in a meeting with officials who want to take Charming back from the clutches of SAMCRO. Zobelle opens Impeccable Smokes on Charming’s main street, and his true affiliations are clear. Zobelle is the leader of a Nationalist group that is also partnered with the Aryan Brotherhood, which includes AJ Weston (Henry Rollins), Zobelle’s right hand. They attempt to bully Clay and the club to stop doing business with the minority gangs in the area, but he refuses. Zobelle then sends Weston, his daughter Polly (Sarah Jones), and several others after Clay’s wife Gemma (Katey Sagal). The men brutally beat and sexually assault her, warning her to get Clay to end the business with the minorities. Knowing that revealing the truth of her assault will bring the war they want, Gemma keeps it hidden, staging her injuries as those from a car accident.

Agent June Stahl (Ally Walker) returns in the second season to instigate additional problems within the club. Her previous antics framed Opie (Ryan Hurst) as an informant and resulted in the death of his wife. Even amidst the incident, her focus on the Sons and the IRA is more laser-focused than ever. Donna’s death looms largely over Sons of Anarchy’s second season as Opie continues to grieve, while Jax begins to realize that Clay and Tig Trager (Kim Coates) are the ones that placed the hit on Opie that accidentally ended with Donna dead. This is a significant source of the tension between Jax and Clay in season 2, which seems to almost work in the favor of Agent Stahl. Unfortunately for her, even amidst the animosity, the Sons aren’t ones to rat on their brothers. The IRA’s Cameron Hayes (Jamie McShane) also proves to be a formidable enemy for the Sons before it’s all said and done.

The second season of Sons of Anarchy currently has the series’ second-highest rating on Rotten Tomatoes. The highest rating belongs to its fourth season, which stands strong at a perfect 100%. What makes season 2 the best example of Sons of Anarchy as a series, is the emphasis on the members of SAMCRO. In the series’ second season, there is still a lot to learn about each member of the expanding motorcycle club and what fuels them. With this established, the later seasons are able to focus on exploring other facets of their ties to business and one another. Instead of the outside threats, season 4 echoes what season 2 suggests: the biggest threat to SAMCRO is internal. The only thing that can tear the club apart isn’t their rivals, but their attitudes toward one another.

Sons of Anarchy is now streaming on Hulu.