Home Entertainment Songs Of Conquest: Tips for the Rana Faction 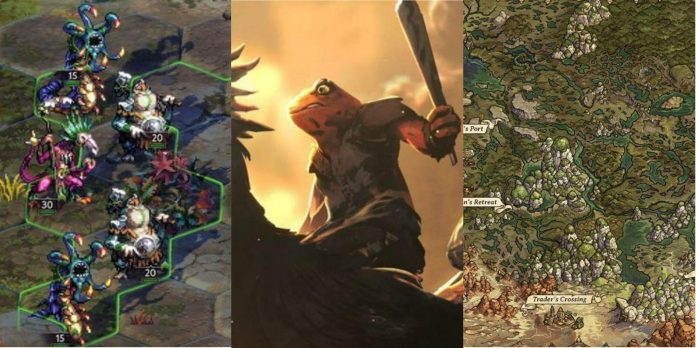 After centuries of oppression at the hands of Humans, the amphibian Rana finally have the opportunity to cast off their oppressors and claim power and independence for themselves. As the fastest faction in Songs of Conquest, the hunters and beastmasters of Rana excel in cutting down opponents before they know what hit them.

Rana needs to make the most of its speed, however, since their fragile units go down fast in a fight. Striking the right balance between thoughtful planning and aggression can be difficult with this faction, but once mastered they can be one of the most enjoyable armies in this new strategy game. Here are some vital tips for finding success with Rana.

As a true beast army, Rana mixes swamp predators with anthromorphic frogs and lizards. One of the main things a Rana player must grapple with is the army’s unique strengths and weaknesses in battle. With few ranged options, the army depends heavily on their ability to do huge amounts of damage to the opponent, as long as they strike first.

Though it takes a long time and huge amounts of resources to recruit them, Dragons can deliver victory to Rana in even the most desperate situations. They are the most powerful unit in Songs of Conquest, which is why acquiring them is both so difficult and so satisfying. There’s nothing quite like seeing dragons wreak havoc across the battlefield; the tricky part is living long enough to recruit them.

Rana players must make the choice between Crawlers and Ravagers as the mid-tier units to focus on, relying on them to deal the bulk of the army’s damage. Ravagers (produced at a Beast Corral) are faster but weaker than Crawlers (produced at a Mud Hut), which do similar damage but are slower and heartier. Both can utilize the Wait ability once upgraded, and the player will want to unlock it as soon as possible.

RELATED: The Based Strategy Games You Can Play On The Switch (According To Metacritic)

Hunters and Shamans will serve the player well in the meantime, keeping enemies from reaching the Rana player’s city and helping to level up the Wielder. Hunters deal considerable damage in large numbers and have high initiative but perish easily in a fight. Shamans poison their enemies and provide Arcana Essence rather than the Destruction Essence of Hunters.

6 Wait To Spring An Attack

In battle, the optimal Rana strategy is a strange blend of patience and aggression. The player should first use the Wait ability for Riders and Adult Crawlers to let them charge at the end of the round, then attack at the start of the next round.

By waiting in the deployment zone and waiting for the enemy to approach this way, the Rana player can blitz the enemy with the full force of their army, aiming to destroy multiple enemy units in the first attack. Waiting and then springing on the opponent ensures that Rana will get the most combat value out of its speedy but vulnerable creatures.

Ranged units can spell the death of even a well-prepared army if only a few mistakes are made. One of the best ways to counter such units as Rana is to bait the enemy into an untimely approach. To do this, move units on the first round until they are just out of range of the enemy’s attacks. If the opponent moves closer, they will suffer a damage debuff for moving and will also expose themselves to further damage from Rana’s charge the following turn.

RELATED: The Best Turn-Based RPGs On PS4 (That You Can Also Play On PS5)

It’s easy to miscalculate decisions at the beginning of a battle and find valuable units pushed to their limit. The spells Mist and Ethereal Scales can be crucial for helping a Rana player save a unit from a desperate situation, so whether or not the player is relying heavily on magic, special consideration should be given to those spells to help keep Rana’s army of vulnerable amphibians alive.

One of the most basic and important decisions a player must make in Songs of Conquest is which Wielder to use. Every Wielder has abilities that synergize well with certain skills, spells, and strategies, and there are two main strategic routes one can take. A player can either choose a Wielder who maximizes their faction’s strengths, or one who minimizes their faction’s weaknesses.

Most Rana Wielders do the former, granting the army additional speed or attack power. P’Cha, The Hermit and T’Chyra, Dragon’s Blood buck this trend. The former grants Rana units a 40% damage reduction buff against enemy spells, making the army far hardier than it would otherwise be against spellcasting armies. T’Chyra, meanwhile, produces additional Arcana Essence, improving Rana’s own spellcasting ability.

However good the player’s strategy is in other areas, if one has a poor grasp on the proper build order for their faction, they will suffer many losses that could otherwise be avoided. The choice between Diggers and Gatherers for the first resource building will depend upon whether the player intends to prioritize Mud Huts (which need Wood) or Beast Corrals (which need Stone).

The next building to prioritize is the Lean-To, as a significant number of Hunters is required to maximize that unit’s efficiency within the army. A Shaman’s Tent is useful for its ability to provide Rana with Shamans, poisoning the enemy at range. The medium build slot can be devoted to either a Beast Corral or Mud Hut, depending on the player’s plans for their growing army.

2 To Crawl Or To Ravage?

The choice between Crawlers and Ravagers is a significant one, but it’s not an easy one to make. If the player intends to focus on ranged units with Ethdra and Shamans, Crawlers are the better fit, as they will be needed alongside Guards to keep those vulnerable ranged units alive.

Ravagers, meanwhile, play to the strengths of armies that intend to rely on pure speed and aggression, as Ravagers are not only faster but also have fewer requirements to unlock, allowing the player to access them faster. There’s no real right answer here. Which units the player intends to prioritize is largely a matter of taste, and as long as they can weigh the pros and cons of each, Crawlers and Ravagers can both serve well.

1 Here There Be Dragons

At the very top of the Rana troop pyramid are Dragons. Unlocking and building them is time-consuming and therefore risky, and won’t be a factor in shorter games. However, if the player faces multiple opponents or otherwise has good reason to expect that the end-game will continue for some time, unleashing Dragons can be just the answer.

Elder Dragons are the single most devastating unit in the game. They have incredible stats, buff allies, debuff enemies, and strike not only their target but the unit behind it with their devastating melee attacks. The commitment of time and resources to recruit Dragons is such that the player should know at the beginning of the game whether they intend to pursue these fearsome beasts.

Songs of Conquest is available in early access on Windows and macOS.

John Romero Works on Sigil 2, But This Time He Will...

Scott Disick and Kimberly Stewart Meet after Romance Rumors: They are...