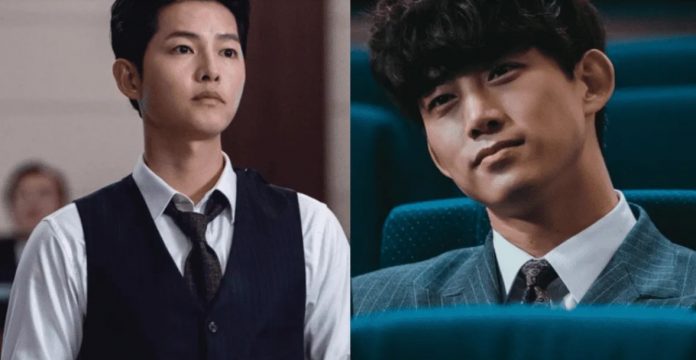 Song Joong Ki and Taecyeon became inseparable on the set of the hit drama Vincenzo, their friendship took so much strength that in the new project of the 2 PM member, his colleague showed his love and support.

Vincenzo left us many incredible moments, besides being one of the most memorable K-Dramas of the season, he also showed the chemistry and affection between his actors, two of them Song Joong Ki and Taecyeon.

Despite the Netflix drama coming to an end a long time ago, Song Joong Ki and Taecyeon continued in communication and were shaping up to be the spoiled friend of the screen, what do you think of their adorable relationship?

The protagonist of Descendants Of The Sun could return to dramas soon with the production of Chaebol Family’s Youngest Son, but the one who already has a project on the horizon is Taecyeon and Song Joong Ki sent the best vibes to the set of his new drama. : 0

Tale Of Secret Royal Inspector And Jo Yi has already started filming, and Song Joong Ki took advantage of a call from Taecyeon to the set, sending his friend a personalized and unforgettable gift.

The Korean star gave the interpreter of My House a coffee cart with images of the idol in black and white, of course, there were messages of encouragement for Taecyeon to show the best of his talent in front of the screen.

The player of Space Sweepers prepared some banners with words that surely filled with good vibes Taecyeon, one of them was:

Have a soda and go for the rest of the filming.

Who doesn’t want a friend like Song Joong Ki? Many raised their hands immediately and it is not for less, because the star also thought about the rest of the production of Tale Of Secret Royal Inspector And Jo Yi, everyone enjoyed drinks and snacks that served as a respite in the recordings.

Meghan Markle’s “Forgotten Terrible Bosses” Cameo — Who Did She Play