Home Tech Solar Panel Collecting Water From The Air And Converting It To Drinking... 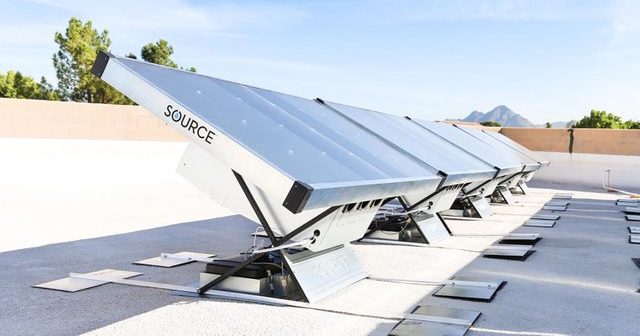 Solar panels, which have been used in many places for years, including our country, are generally preferred in electricity production. The panels named Source, which is the subject of this news, collects water from the air and turns it into drinking water by passing it through a filter.

Today, the sun is among the most easily accessible sources among renewable energy sources. Scientists have developed solar panels to use this resource more efficiently. Although solar panels are used by many to generate electricity, scientists have discovered a way to use them in a different area.

Moisture in the air turns into drinking water:
The working principle of the source panels was also explained. First of all, sunlight provides energy to the panel to turn the propellers inside the panel that absorb moisture from the air. After air and moisture enter the panel, the air is purified. The remaining materials then pass through a sponge-like material that condenses the water vapor and accumulates it in a chamber. In the last step, the water is mineralized to make it drinkable and ozonized to keep it clean.

After this step, all you need to do is to use a tap to carry the water on the panel home or to connect it to a device such as a refrigerator. According to Zero Mass Water, standard two-panel Source devices can produce between 12 and 24 glasses of water that can absorb 16.9 ounces (about half a liter) of water, but this amount can vary depending on the sun, of course. Although the amount of moisture in the region is a parameter that makes the result quite noticeable, it is guaranteed that the Source panels will operate in environments where there is little humidity.