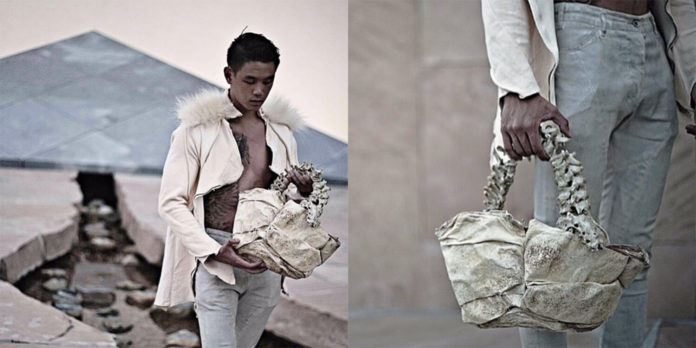 In Indonesia, a fashion designer designed a crocodile tongue and a children’s spine bag. While the spine was said to be purchased from Canada, the social media had a great reaction to the designer. It was determined from the images shared by the designer that the spine really belongs to a human.

A product designed by an Indonesian fashion designer in 2016 received a great reaction when it became an agenda again on Twitter. In 2016, Indonesian designer Arnold Putra shared a bag design from his Instagram account. The bag was allegedly made of a children’s spine and crocodile tongue. The image of this bag was re-circulated by the user named ‘wqbisabi’ on Twitter. This now deleted tweet restarted the discussions.

According to what was written under the original Instagram post, the bag was made of crocodile tongue and the backbone of a child with osteoporosis. Putra told Insider that the spine was taken from Canada. According to Canadian media agency Global News, it is legal to buy and sell human bones in Canada.

Great reaction in social media:
With the re-emergence of the bag, a negative view began to appear on the Instagram accounts (‘arnoldputra’ and ‘byarnoldputra’) associated with Putra. One user said, “Insulting a dead child to profit … The bottom of the pit …” and another user said, “God have mercy on you.” While Putra concealed most of the comments in his posts on the incoming reactions, he later took his account secretly, even for a short time.

According to Insider, two different doctors confirmed that the spine in the bag was real, but could not determine if it belonged to a child. Besides all these, the bag made of children’s backbone is not the only shocking design of Putra. Other products of the designer include a jacket made of human skin, polar bear fur and human rib. Putra; he said the bag is from an incomplete collection of ‘unprecedented materials used to make garments’.

The non-design posts of Putra include poses with people or dead people who drill each other’s heads. Again, photographs taken by Putra together with local tribes are included in his account. Putra said there was no plan to change the ‘design process’ due to reactions.