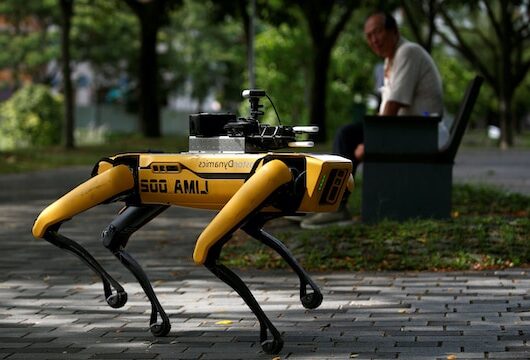 The Singapore government released a robot dog named Spot, developed by Boston Dynamics, in one of the country’s crowded parks. Spot warned the people he saw in the park to maintain social distance.

The number one rule of protection from coronavirus is the protection of social distance. In other words, we need to put a certain distance between people we love and people we never know.

Especially in crowded environments, maintaining social distance is of much more critical importance because someone you do not know can easily infect the virus as you pass by. For this, mask usage and social distance rule are very important.

Singapore is one of the countries where coronavirus epidemic is observed. Strict measures and interventions in the country, where 21 thousand 707 cases have been seen so far, have made the epidemic easily under control. The country has lost only 20 citizens to the epidemic to date. Now, news from the local press in Singapore reveals an interesting method the Singapore government has implemented to emphasize social distance.

Boston Dynamics, which does important works on robot technologies, is the subject of our news from time to time. However, this time, Spot, a robot he produced, not Boston Dynamics. The Singapore government released a robot dog named Spot in Bishan-Ang Mo Kio Park, one of the crowded places in the country.

Spot alerting people to a park in Singapore
Spot is a highly developed robot dog. Spot, which has sensors almost everywhere, has the ability to speak (!) Thanks to its speaker. Officials in Singapore, who wanted to take advantage of this feature of Spot, drove the robot dog to the park and warned people to maintain social distance.

In fact, robot technologies were used in our country during the coronavirus outbreak. For example, once the police drone warned young people on the roof with the drone that violated the curfew and social distance rules. In another incident, a drone used in Sultanahmet Square warned people to stay at home.

Space Perspective is Preparing for Space Tourism by Balloon