Qualcomm this week expanded the line of mobile 5G processors aimed at top-of-the-line mobile devices. In July 2020, the Snapdragon 865+ inaugurated some components and improved the performance of the current generation. In December, the Snapdragon 888 arrived, also for premium models. Finally, surprisingly, the brand confirmed yet another variant: the Snapdragon 870, from January 2021.

But do you know the difference between these models? They have a number of similarities and, for those who are not interested in the particularities of the processor, they perform above average in general. However, specific differences in operation and manufacture make some of them more suitable for certain uses.

Check out a more detailed analysis below.

Different from the cradle

The manufacturing architecture of the chips in question is not the same, which in itself indicates some differences. The Snapdragon 888 is the model with the most advanced 5 nanometer (nm) process, while the others use a 7nm FinFET format architecture.

The cores that make up the processing unit also differ, both in speed and in the model. The Snapdragon 870 and 865+ are practically identical in this regard, with a slight change to the Cortex-A77, which is 0.1 GHz more powerful on the first chip. The Snapdragon 888 exchanges this core for a Cortex-X1 – which, despite the lower clock speed, delivers superior performance in general, with emphasis on machine learning.

The graphics processing unit is also only different in the most powerful model: the 888 has the Adreno 660 GPU, more advanced than the Adreno 650 of the others. Even the set of digital signal processors (DSP) changes in the same pattern, with the Hexagon 780 being a generation ahead of the Hexagon 698. 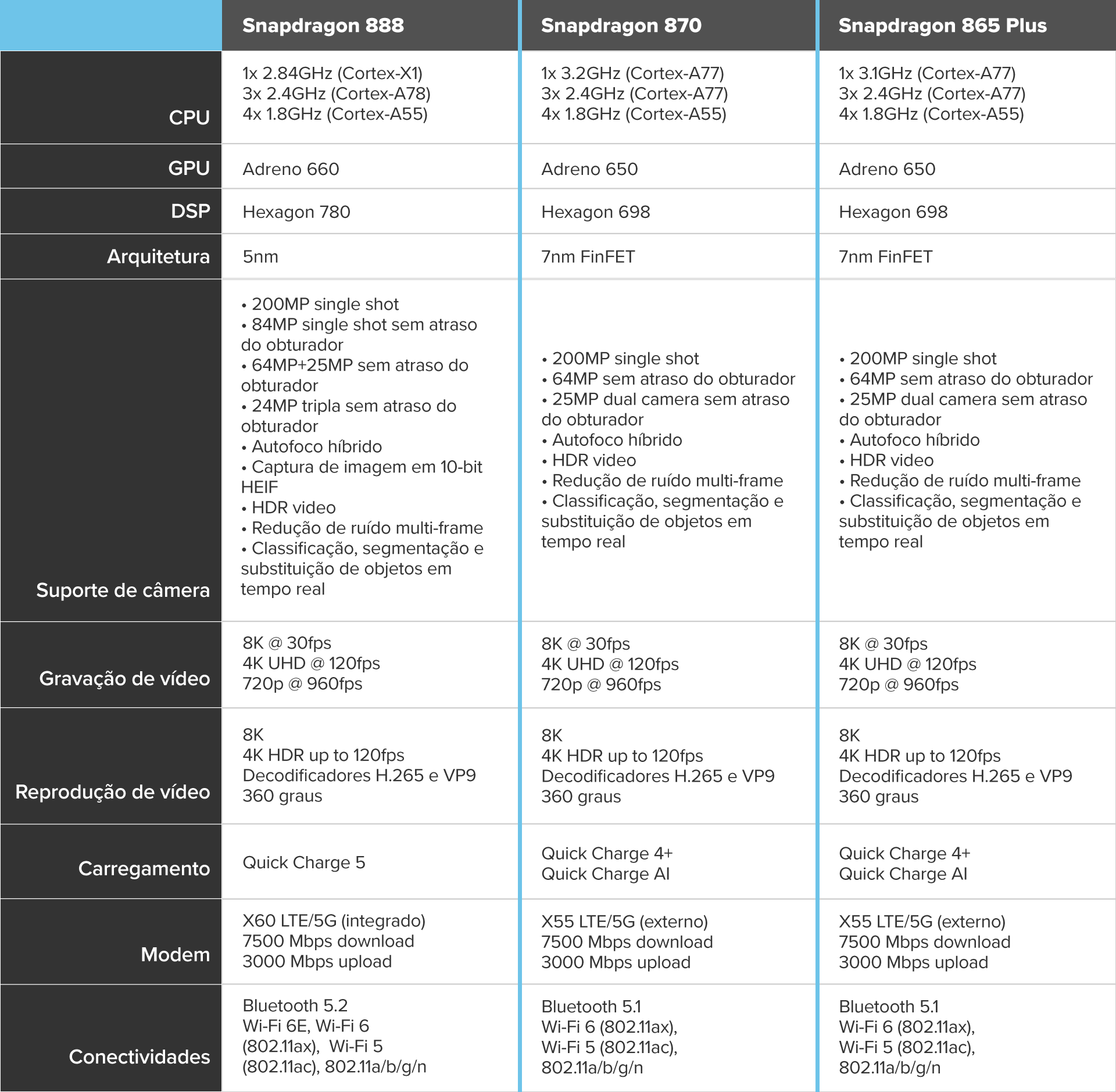 In terms of the set of cameras, we can see sensors of up to 200 MP in cell phones with both processors, which maintain technologies already widespread, such as hybrid autofocus and HDR video. The Snapdragon 888 delivers better numbers by supporting a sensor of up to 84 MP without delay by the shutter, making configuration flexible for up to three 24 MP lenses. Image capture in the 10-bit HEIF standard with high compression is also a plus

One of the few similarities between the three processors is in the video. They all support models with cameras that shoot at up to 8K at 30 frames per second, in addition to reproduction at the same resolution and 360º clips following the same coding standards.