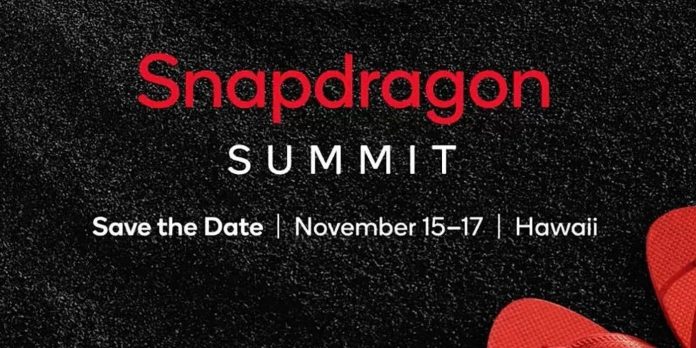 Just hours after the announcement of the Snapdragon W5 Gen 1 for wearables, Qualcomm confirmed the date of its next Snapdragon summit, at which the company is expected to unveil the Snapdragon 8 Gen 2 chipset for smartphones. Qualcomm holds its annual summit in December, and one of the highlights of the event is the presentation of its latest flagship mobile SoC. Last year, the company held an event in Hawaii, as it does every year, and announced the Snapdragon 8 Gen 1 as its new top-tier mobile processor. This chip is used in most modern flagship smartphones, including the Galaxy S22 series, OnePlus 10 Pro and Moto Edge 30 Pro.

Qualcomm released Snapdragon 8 Gen 1 earlier this year, releasing Snapdragon 8+ Gen 1, offering recurring updates over its predecessor. The biggest difference between the two chips is their manufacturing process. While the old chip was manufactured by Samsung using a 4-nm process technology, the new chip is manufactured using a 4-nm TSMC process technology. From the point of view of technical characteristics, both have the same core configuration, but their clock speed in the new chip is slightly higher than in the standard version. Qualcomm also claims improved GPU performance, a faster AI engine, and better battery efficiency in the new SoC.

The next Snapdragon Summit will be held from November 15 to 17 in Hawaii. Although the event is usually held in December every year, Qualcomm moved it forward a month this year. The company has not officially confirmed that Snapdragon 8 Gen 2 will debut at the upcoming event, but it is likely that it will happen if years of precedent pass. It is expected that after the presentation, many Qualcomm OEM partners and Android manufacturers will announce the release of new flagship smartphones based on the new chip.

In terms of what to expect from the Snapdragon 8 Gen 2, numerous leaks over the past few weeks have revealed a few details about the upcoming chip. According to reports, it is expected to be manufactured by the Taiwanese firm TSMC using a 4-nm process technology and will have the model number SM8550. According to the Weibo Digital Chat Station informant, it will come with four different CPU clusters with core configuration 1+2+2+3 , as opposed to a combination of 1+3+4 in Gen 1 chips. It is reported that the processor in Snapdragon 8 Gen 2 will be equipped with one Cortex-X3 core and will consist of 2 Cortex-A720 cores, 2 Cortex-A710 cores and 3 Cortex-A510 cores.

It is reported that the SoC will also include an Adreno 740 GPU, which should have even more firepower than the already impressive Adreno 730 in Gen 1 chips. Meanwhile, the decision to reduce the number of efficient Cortex-A510 cores from four to three is interesting, since most mobile chipsets, including Apple A15 Bionic, have four efficient cores for monitoring energy consumption and thermal performance. Thus, although changing the structure of the Qualcomm Snapdragon 8 Gen 2 core may give a small performance boost, it remains to be seen whether it will also lead to higher power consumption and higher temperatures under constant workload.

The prequel game “The Witcher” Gwent: Rogue Mage has been announced,...