Home Entertainment Smash the technical limits of the ZX Spectrum with a spectacular racing... 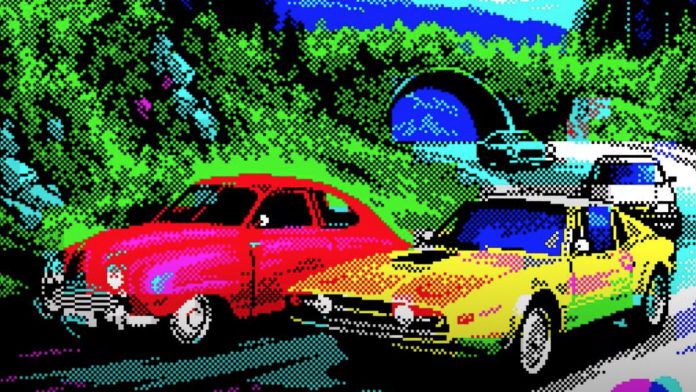 Travel Through Time Volume 1: Northern Lights is an impressive game that challenges what can be done on Sir Sinclair’s computer The scene around classic machines never ceases to amaze us and shows that their technical limits are there to be broken. Many years after these machines were relegated by more powerful ones and the studios that had grown with them jumped to 16 bits, a group of developers insist on making us see that their capabilities were not fully explored despite the thousands of games they hosted in their glory years. The latest and perhaps most spectacular example is found in Travel Through Time Volume 1: Northern Lights, an impressive narrative driving game for the ZX Spectrum 128 that has left the community stunned around Sir Sinclair’s venerable computer.

Zosya Entertainment, the creators of the project, are a St. Petersburg-based company specializing in microcomputer games, which they sell in custom boxes and also release for free to the community. They have had some notable projects in recent times, but they have undoubtedly been surpassed with Travel Through Time, a narrative driving game set in Scandinavia where we will play Sven Larsson, a young man who is interested in amateur racing competitions that are held in your region.

As a result, a journey through time and the different evolutions of cars through the decades will begin. But while the narrative factor is interesting, what really makes this title stand out is how incredibly impressive it is technically. Made by three people, Kit as a programmer, Manu as a graphic designer and Tiurula in charge of the evocative music, we can say that the game equals or surpasses the great professional references of the genre in 8 bits such as the conversion of Chase HQ or Continental Circus. Large and detailed cars, a varied circuit and a framerate that stays around a very remarkable 25 FPS are some of its first letters of introduction, but the best comes when you spend some time.

Its greatest virtue is the richness and variety of the circuits. Details such as the dynamic shadow when we cross under a bridge, something that today may sound irrelevant in these days of ray-traced games, but that is impressive in the context of the machine in which we are seeing it. Another example is found in traffic signs, which not only mark curves or changes in the line, they also warn us of things such as zebra crossings or level crossings. Are they an anecdote, a part of the landscape? Well, at one point in the race, focused on arriving as soon as possible, a sign warned us of a level crossing that we ignored in our rush to sprint only to see how a train took our unfortunate protagonist ahead.

Why did the Finale damage the reputation of the Avengers, and...