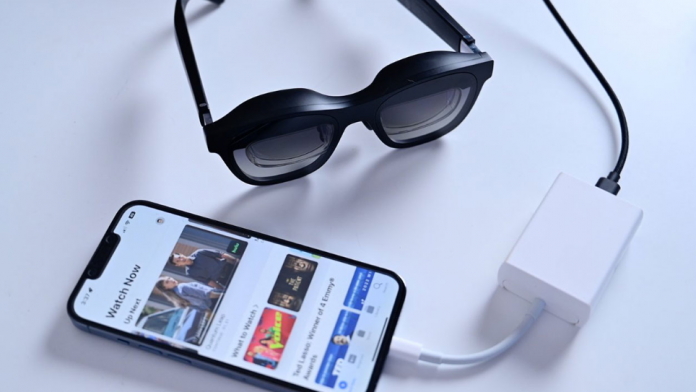 The American brand Nreal has developed augmented reality glasses with which you can easily reflect the screen of iPhone, iPad and Mac devices. Thanks to these glasses, you will be able to see small screens in huge sizes.
If you remember, in recent years it was claimed that Apple was working on augmented reality glasses. In fact, a lot of details later appeared about these glasses, from the price range to performance.

While many Apple users are waiting for these glasses to appear, the American manufacturer of AR (augmented reality) has introduced AR smart glasses that are fully compatible with iPhone devices. Let’s see what glasses have to offer.

You can mirror the iPhone screen on the glasses

These augmented reality glasses called Nreal Air, produced by the American brand Nreal, allow you to reflect the screens of iPhone, iPad and Mac devices on the glasses. These glasses, which look like sunglasses on the outside, can present you with these TV-sized images thanks to the second lens inside.

Glasses with two built-in speakers and microphones on the handle, unfortunately, cannot work without wires. To actively use the AR function of the glasses, you need to connect the glasses to your Apple device using a special adapter that comes with the kit. After this connection, you will automatically see the screen of your device on your glasses.

You can watch movies, browse the web using mirroring, and even play high-end games with systems like GeForce Now using a wireless controller. However, of course, “screen projection” is not the only feature of glasses. If you install the Nreal app on your device, you can experience dozens of augmented reality games and activities in it.

The sale price of Nreal Air, which is not sold in our country, in the USA is $ 379 (7,007 TL excluding taxes). Nreal Light, a version of Nreal that has the same features and is compatible with Android devices with Qualcomm processors, is priced at 359 US dollars (6,637 Turkish lira excluding taxes).

Kissing Booth and For All Boys end this year on Netflix