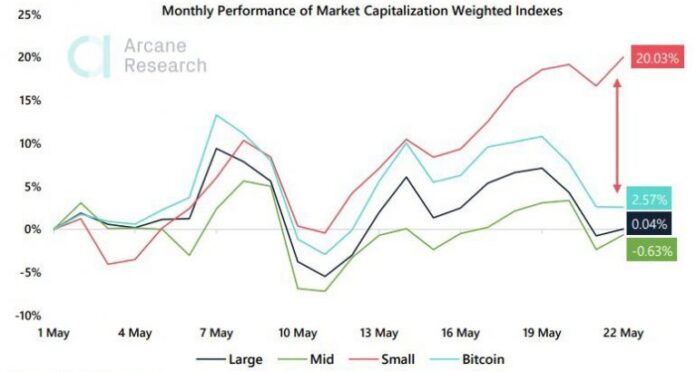 In terms of market value, small altcoins have performed much better lately than large and medium-sized altcoins.

The Small Caps Index, which includes altcoins with a smaller market value than others, has increased by more than 20 percent in May so far. According to the latest report from crypto research company Arcane Research, other indices, including Large Caps and Mid Caps, seem to be struggling to stay in the green zone this month.

The Small Caps Index contains cryptocurrencies that are in the first 30-70 range according to market value. In this category, OmiseGo, Theta Token and ICON were the top 3 coins performing best this week. Especially OmiseGo’s price increase was striking. The price of altcoin, which was listed on Coinbase a while ago, has risen above the $ 0.75 level above $ 2.

Medium-sized altcoins showed a performance of -0.63 percent in May, whereas this was 0.04 percent in large-scale altcoins. On the other hand, Bitcoin has increased by 2.57 percent since the beginning of the month.

WhatsApp: Allows you to use 4 devices at the same time

How will the weather be in the New Year and New...