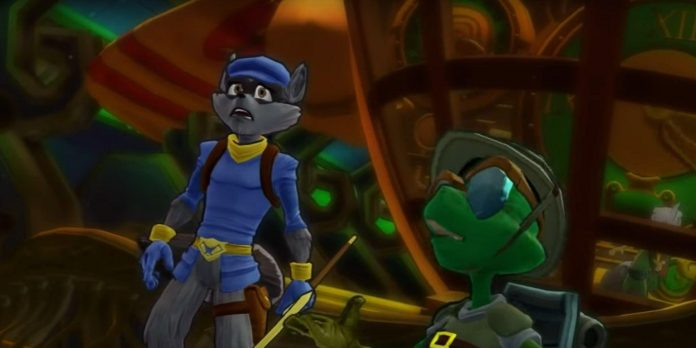 In recent years, Sucker Punch is a studio that has become known for the Infamous series, which lets gamers experience having superpowers along with the moral dilemmas that come with it, and Ghost of Tsushima, which takes players to Japan’s Tsushima island during the Mongol invasion. Both IPs have been hugely successful, especially Ghost of Tsushima, which has spawned an upcoming film and has resulted in Sucker Punch’s directors becoming ambassadors for the real-world Tsushima island. However, before players were shooting neon in Seattle or petting foxes on Iki Island, there was Sly Cooper.

The first game in Sucker Punch’s Sly Cooper series was released in 2002, and it was hugely successful thanks to its humor, unique art style, and rich personality, leading to plenty more games being developed. However, since Sly Cooper: Thieves in Time, the only title not produced by Sucker Punch, the series has seen a lull, and no new games have been released. It is sad to see this lovable franchise fall by the wayside, especially when it has the opportunity to join in on the wave of classic platforming games that are enjoying a revival.

For a long time, PlayStation’s streaming services paled in comparison to what Microsoft offered. However, in 2022, Sony revamped its PlayStation Plus subscription service by fusing it with PlayStation Now and providing multiple tiers for gamers to pick the subscription plan that suits them. Gamers that select the PlayStation Plus Deluxe or Premium deal gain access to a catalog of classic games that can be streamed, including PS3 games, PSP games, and PS1 games. Some games on offer are quite dated, but they have been made playable by bumps in framerate and resolution, and players can rewind and save at any time.

Since the service has launched, gamers have been able to enjoy a plethora of games from throughout PlayStation’s history, including several platformers that were essential parts of many gamers’ childhoods, such as Echochrome and Jak and Daxter. Unfortunately, Sly Cooper is not present, which is a disappointment. This does not mean that it will never appear, as games are inserted in the catalog on a rotating basis. However, it does not seem like Sly Cooper will be getting much attention soon because Sucker Punch, as it recently revealed, has its sights set elsewhere at present. This is a pity because, despite their age, the Sly Cooper games hold up quite well and can still be enjoyed by modern gamers. Furthermore, the cartoonish art style has ensured that the games do not look too outdated.

In recent years, plenty of classic platformers have been revived, and they have been received warmly by gamers. This is seen, for instance, with Crash Bandicoot. Originally developed by Naughty Dog, the franchise was later picked up by Vicarious Visions, leading to the release of Crash Bandicoot N. Sane Trilogy, which is a collection of the first three games remastered. The remasters were very well-received, becoming the best-selling game launch of the first half of 2017 and paving the way for the release of Crash Bandicoot 4: It’s About Time in 2020. The successful reboot of the series proved that it is possible to reboot classic platformers for modern audiences.

RELATED: Why Sucker Punch Should Make Ghost of Tsushima 2 Next

Crash Bandicoot is not the only platformer that has enjoyed a comeback. The Spyro franchise, which features a purple, fire-breathing dragon, was first released in 1998 on PlayStation. Although sales for the first game started slow, it eventually gained popularity, paving the way for a successful series. Like Crash Bandicoot, the Spyro series experienced a lull until remastered versions of the first three games were released. Developed by Toys for Bob, Spyro Reignited Trilogy hit store shelves in 2018, which sparked renewed interest in the cute, gliding dragon.

Given the success of both Crash Bandicoot and Spyro, it seems like a no-brainer that Sly Cooper should receive a reboot as well. However, it does not seem like it is in the plans, at least for the near future. In a recent post on its site, Sucker Punch confirmed that it currently has no plans to revisit Sly Cooper or Infamous at present because it is busy with projects that require its full attention. It also made it clear that no other studios are busy with the IPs either. This is surely terrible news for all Sly Cooper fans, especially when the market has shown itself to be so ripe for classic platformers to make a comeback.

The first three games in the Sly Cooper series have already received remasters before through The Sly Collection which was released on PS3 and PS Vita. However, that was in 2010, and gaming has progressed enough to warrant high-quality remakes of the beloved classic games.

A new entry to the series would have also been greatly appreciated, as gamers it would provide an opportunity for developers to reboot the series for a new generation of gamers while retaining the stealth platforming gameplay that made the games so popular. Seeing every Sly Cooper character rendered in painstaking detail would be a treat for longtime fans, while developers would get to do so much more with how they allow players to interact with the environment and hide from enemies.

In modern times, the development period of games has greatly extended, and it takes far more people to craft AAA titles. Consequently, studios cannot work on every project that they would love to invest their time and money into. Sly Cooper, unfortunately, is a victim of the fact that studios cannot do everything they wish to, and some franchises will inevitably fall to the wayside. The news that Sly Cooper will not be getting revived is sad, especially in the wake of the revival of so many other classic platformers. However, it does free Sucker Punch to make other games or continue with IPs that have hooked gamers, including Ghost of Tsushima.

Sly Cooper: Thieves in Time released in 2013 for PS3 and PlayStation Vita.

Preview of The Jack box Party Starter: Updated Entertainment for Everyone

The Last Kingdom: The Most Special Appearance Of All That Very...