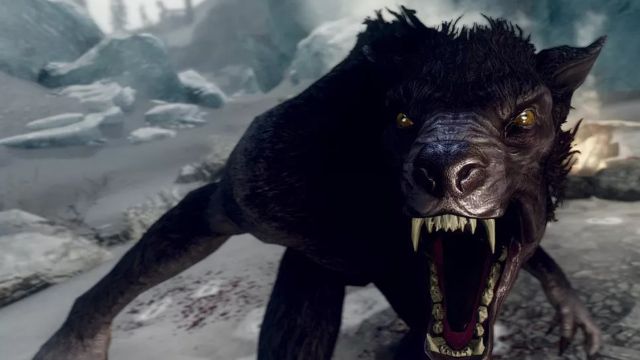 Skyrim: The launch of the 10th anniversary edition has rekindled interest in a game that has never disappeared. The Elder Scrolls V: Skyrim continues to generate interest and information more than a decade after its release. Published on several generations of consoles and on PC, Bethesda’s work has become a real success for the company, which is still immersed in the design phase of the sixth installment of the saga. Those who have played the title will remember the transformation into a werewolf, an amazing metamorphosis that was initially going to be more than ridiculous: a person with the head of a dog.

Some Skyrim developers have celebrated the anniversary with a talk, in a video (just on these lines) where he has reflected on this question. “This was always absolutely hilarious, that they were going to be people with dog heads, completely normal bodies,” said Nate Purkeypile, world artist. “Everybody was going to be scared. Meanwhile, there was a cat boy drugged in the city and they all seemed fine. ”

This is followed by Dennis Mejillones, the character artist who wanted to turn werewolves “into a power fantasy” for players. The creative considers that the original designs were “horrible”. In addition, they feared that this could generate criticism. The main problem is that this new vision could break the game, although a solution was later found that consisted of changing the zoom of the camera so that it appears that the werewolf was running at a higher speed.

Todd Howard, one of Bethesda’s most important figures, was ultimately the one who gave the green light to take down the dogmen. “I remember the first time we showed Todd the proof of concept and he said, ‘This is fucking great.’ Some tried to protest, but the decision was already made. Werewolves had to be werewolves.

The Elder Scrolls V: Skyrim has recently released its 10th Anniversary Edition, which introduces an update to the new generation, also for owners of the Special Edition.