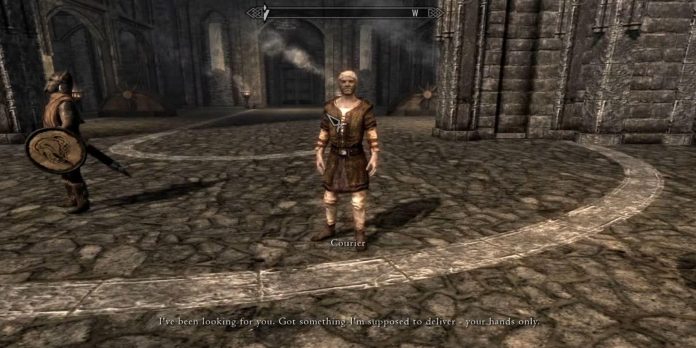 At the moment, it is more than ten years old, but the power of Skyrim is still felt in the gaming industry. Despite the fact that Bethesda is currently working on The Elder Scrolls 6, this fifth installment of the iconic RPG franchise still attracts players. Sometimes this doesn’t always happen for the right reasons, as the game is particularly notable for containing a lot of bugs. Although there are glitches that are harmless from the point of view of gameplay, there are also those that, frankly, make the game scarier than it should be.

At least, this was noticed by Reddit user KriegerGoose. During an innocent game of Skyrim in a short video, you can see how they climb to the roof. When they reach the top, they notice an NPC courier standing completely motionless on the top beam, saying nothing and just looking at the Dragonborn. When the user turns his face to the side and then turns back, the letter symbol disappears. This makes the player frantically look around, wondering where he could have gone. As a result, KriegerGoose insists that TES5 is actually a horror game.

It is known that the courier in Skyrim is quite persistent and can track down the player wherever he is. As NPCs, their role in the story is to be a messenger, and they will often approach at different intervals to deliver a letter intended “for your hands only”. This usually leads to a quest, but the fact that they can find a Dragonborn, no matter how treacherous the land may be or what dangers await them, has turned this particular resident of Tamriel into a meme.

Of course, what the Reddit user encountered is not part of the game itself, but is just one of the many glitches that have been the backbone of the game since its release in 2011. Even last year’s anniversary edition of Skyrim had some notable bugs. Similar to what KriegerGoose noticed, many of them can be a little funny or even a little creepy, but there are also some that can break the game, causing players to lose their immersion.

Despite the problems that have been present since day one, and the fact that the game is already outdated, Skyrim is still one of the best-selling games of the current era. What keeps it alive is a combination of the fact that it’s just a good game overall, a modding community that is dedicated to improving and adding to the vanilla experience, and a list of bugs that fans are more than happy to expose on public forums.