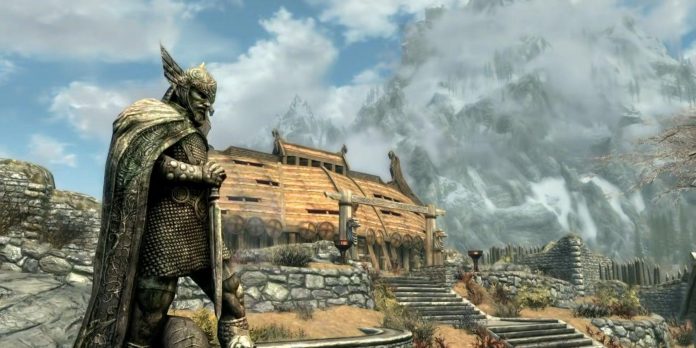 Despite the release in 2011, The Elder Scrolls 5: Skyrim did not leave gamers indifferent. The game was released on several generations of consoles in various editions, which allowed a large number of fans of role-playing games to try it. Although the game is more than ten years old, Skyrim is still relevant for modern players.

One of the reasons the RPG has survived is the modder community. A constant stream of mods is still being created for Skyrim, which gives gamers a reason to come back. Additions to the game can range from chaotic to useful, including one mod that allows players to soar in the sky.

RELATED: Skyrim’s Bees are Stronger Than You Think

A Reddit user known as Glenzz posted a clip in which they used the “Skyrim’s Paraglider” mod, which gave them a glider similar to the one seen in The Legend of Zelda: Breath of the Wild. In the video, Glenzz stands on the edge of the Throat of the World and looks down at the landscape. The player jumps from the mountain with a running start, and then creates a glider. Slowly descending down, they look around, showing most of the beautiful world that Skyrim consists of. Eventually, the player sails to the Skyrim city of Whiterun, where he ends his journey by entering through the gate.

Glenzza’s clip has won many fans and gained almost 4,000 votes. One user expressed the idea that he was attacked by one of the dragons of Skyrim during a glider flight, to which Glenzz replied that the beasts attacked them in the air. Another commenter stated that they had never touched the glider’s mod, but the video made them try it out. A number of Redditors wondered what would happen if a player landed in Whiterun from above instead of going through the entrance, to which Glenzz stated that they would do it and find out.

Glider is just one of many mods for Skyrim that players can use as fun or useful. A gamer under the nickname Vexcation has uploaded a mod for Skyrim, which gives players a companion dog. The German Shepherd, named Sparky, starts the game at level 20, and can be found in the Whiterun in the yard of the Yorrvaskra. Sparky has no effect on stealth and is described as wearing the Dawn Guard armor. The dog can offer support in battle, like other followers, and cannot die, as it is considered a “necessary” NPC. The mod allows those who have always wanted a dog in Skyrim to always have a German Shepherd by their side, providing them with an incredibly loyal ally.

The Flash: 7×02 preview of ‘The Speed of Thought’ episode