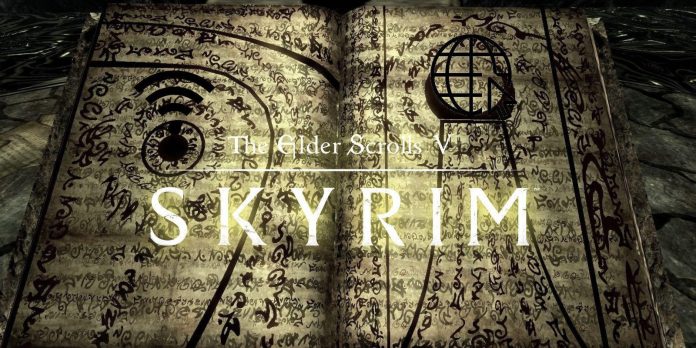 In The Elder Scrolls V: Skyrim, there is a seemingly innocent-looking book that strangely mentions the Internet. In this case, Elder Scrolls fans translated the book and enthusiastically shared its strange content with others. Strange books in the Elder Scrolls universe are not unusual, but this one especially stands out even among them.

Players can find an amazing book in the last three games of the Elder Scrolls series. First appearing in Elder Scrolls III: Morrowind, this book has since become one of many lore books that appear in many games. Although players can only find it in three locations in Elder Scrolls IV: Oblivion, it can be found in many unique locations in Skyrim. The book is also a possible target for the college quest “Bring me this Book!” given to players by librarian Urag gro-Shub.

Related: Skyrim Shows that French is Canonically the Real Language of Tamriel

It sounds strange that a fantasy-based game franchise could have something that so clearly refers to the modern world. However, the story is not as unambiguous as it may seem. Some fans believe that the text of the book should have been a placeholder and never changed due to lack of time or error, while others believe that this is a joke by the developers of Bethesda.

Why a Skyrim Book about the Internet Is a Mystery

We are talking about the book N’Gasta! Kvata! Kvakis! and it was written by a necromancer of the Second era named N’Gasta. N’Gasta is a sload, a slug frog mentioned in Elder Scrolls games, but rarely seen, although N’Gasta himself does appear in The Elder Scrolls Adventures: Redguard. Sload is an obscure language used in the book, and, at first glance, it seems completely suitable for a fantasy setting.

However, keen-eyed fans noticed something strange in the text and took up its translation. The text inside the book is actually a coded version of Esperanto, which is strange enough in itself, but the text becomes even stranger when it is translated into English for the third time. The book, which can be found in the Elder Scrolls universe, is actually the newsletter of the Stockholm Esperanto Society. Here is a rough translation of what the book actually says (it can be heard aloud in a video uploaded to YouTube by Aunt Chai):

Kwa! Quack! (also called Quaco) is a newsletter (or something similar) of “La Raneta” (little frogs). It is sent out to paid members and others who somehow participate in the activities of la Ranetoj. Firstly, it contains information about the venues of monthly meetings, but, of course, also about the latest events of the club. Sometimes it also includes other educational or entertainment materials.

Kvako on the Internet (e-mail and web versions), on the one hand, are another channel for distributing the contents of the paper version. But on the other hand, it is not surprising that the content of different versions cannot and even should not always be 100 percent the same. For example, in low-circulation paper versions, you can publish illustrations that, for copyright reasons, cannot be used on the Internet. However, on the other hand, the low cost of the Internet version removes restrictions on the volume and allows you to post more content, not to mention that it is always relevant.

These circumstances affect the Kvako website, which will also serve as the main homepage of La Ranetoj.

From Sload to Esperanto and English, this book takes the Internet—or at least the mention of it—into the Elder Scrolls universe. Some may wonder what this means and does the Internet exist in the world of The Elder Scrolls? The short answer to that is no. It’s more likely that the developers didn’t want to create an entire language for one book, or perhaps it was just a joke to see if fans would find it. It may even be both, but whatever the true reason that this newsletter got into Skyrim, it is sure to bring a smile to the fans who find it.