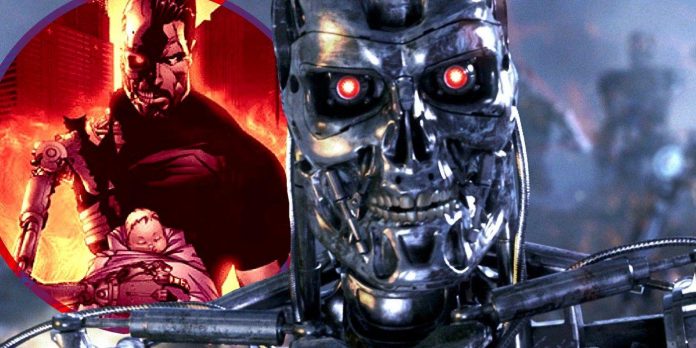 Throughout the Terminator franchise, the titular android killer had many disguises and camouflage capabilities. From voice changes to taking on the physical attributes of others to impersonate them, it can be difficult to distinguish a Terminator from a real person. However, one of the most disturbing imitations of man appeared in the comic book “Terminator No. 1” in 1988.

There were many comics in the Terminator universe, as well as transitions to other universes. This includes crossovers with the Alien and Predator franchises, which have created some pretty terrible mixed hybrids. However, even the Xenomorph/Terminator can’t compare to the most disturbing form that Skynet has chosen for his soldiers in the NOW comics.

A creative team consisting of Fred Schiller, Tony Akins, Jim Brozman, Ken Holewczynski, Rich Powers and Mitch O’Connell is working on Terminator No. 1. This comic follows the events of the first film. It focuses on the future of the universe when Skynet takes over and humans rise up against machines. The first issue follows Sarah’s Slammers, a group of soldiers named after Sarah Connor. They meet an elderly woman with a baby in her arms, who is being chased by a Terminator. Although they may say that the woman herself is a Terminator, some of them relax their vigilance when caring for a child who also turns out to be a Terminator.

The films and the additional TV series “Terminator: The Sarah Connor Chronicles” show numerous models of the titled killing machine. From the iconic T-800 to the adaptable T-1000 and various Hunter-Killer models, Skynet has no shortage of cyborgs and deadly machines. However, none of these media outlets have ever explored the potential of Skynet when it comes to children. While it is not surprising that the machines are aimed at a child, they have never posed as children, despite the obvious advantage that this would give them. It is quite difficult to distinguish some models from real people, but if you are forced to attack a child, the situation will reach a much more alarming level.

The body of a baby or toddler may seem like a strange or even stupid choice for a Terminator, but it has its advantages. Firstly, there is absolutely no habitual instinct to open fire, despite the fact that the Terminator is no less combat-ready. No one will hesitate to open fire when Arnold Schwarzenegger’s T-800 is rushing at them, but this does not apply to this infant horror. Perceived as innocent and generally non-threatening, the Terminator child is also ideal for infiltrating unexpected places that seem safe and ambushing their enemies from almost anywhere. Since these are machines, strength, intelligence and performance won’t matter much. They will have the intelligence and physical capabilities of standard terminators, but they will probably be better hidden and catch opponents by surprise.

Sarah’s soldiers were lucky enough to escape with their lives spared, and it’s relatively easy to get the baby out using futuristic weapons. The weaponry that Kyle Reese complains about in the original movie will definitely create a problem against this enemy, especially if its size allows it to increase speed and mobility. The classic T-800s from Terminator and their future variations may seem like the deadliest machines, but the Terminator kids are the most bizarre killer machine in the entire franchise.

Sylveon Confirms Date In Pokémon Unite: All The Details