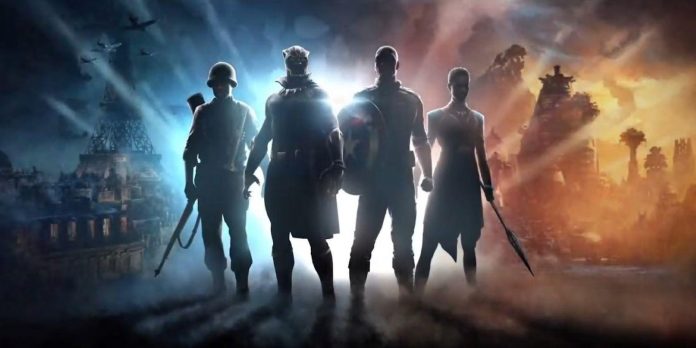 The very first presentation of the Disney and Marvel Games Showcase has just ended, and an amazing number of announcements have been made, including about the Marvel game from Skydance. Although there weren’t too many big discoveries in the extremely fast 25-minute demo, Disney and Marvel fans had a lot to worry about. Nevertheless, one of the highlights of the event was the Skydance project, which was first presented today.

Although its setting and premise leaked this morning, it’s now officially confirmed that Marvel’s Skydance game will revolve around Black Panther and Captain America fighting against Hydra during World War II, something fans probably didn’t realize when Skydance said it. developed the Marvel ensemble game. After showing Captain America’s scratched shield, the trailer ends with an image of four silhouettes of characters with a slogan underneath that reads, “Four Heroes, two Worlds, one War,” and there are a few things that could mean.

What can the phrase “Four heroes, two worlds, one war” mean

The first part of the slogan “Four Heroes” clearly refers to the four characters shown at the end of the trailer. According to the official description of the game, these four include junior Steve Rogers, presumably shortly after he first took the Supersoldier serum, and Black Panther, although this is not the version that MCU fans are used to. Instead of T’Challa or even his father T’Chaka, the version of the Black Panther in Skydance will be Azzuri, T’Chaka’s father.

Although the silhouettes of Black Panther and Captain America are quite recognizable, even avid Marvel fans may find it difficult to identify the other two characters in the game. Again, according to the official description of the game, these two characters are Gabriel Jones and Nanali. Gabriel Jones is an American soldier and a member of the Howling Commandos, Cap’s right—hand man during World War II. Nanali, on the other hand, is the leader of the Wakanda spy network and has a uniform similar to Dora Milaha, the Royal Guard and the elite forces of Wakanda. So, a younger Captain America, a fresher take on Black Panther, a member of the Howling Commandos and a spy of the elite Wakanda forces make up the “Four Heroes” of the Skydance Marvel game.

The second part of the slogan “Two Worlds” may be the most interesting aspect of the entire trailer with several possible connotations. While a multiverse story may be the most literal possibility, it may also be that the “Two Worlds” refer to Wakanda and the USA, with half of the characters hailing from a futuristic African country and the other two from the States. More thematically, “Two Worlds” may refer to the different political views of both nations in that era, with Wakanda as a whole being a more progressive country, while the US harbors some less-than-progressive ideals. It is unlikely that the Marvel game is too much carried away by the themes of race and discrimination, but given that the game takes place during World War II, and three of its four main characters are black, this topic seems rather inevitable and is hushed up. The real problems of that time would have been a strange and potentially problematic move for Skydance.

The final part of the slogan “One War” contains another rather simple answer. Based on several images presented in the trailer, it seems that Hydra will play an important role in the game, so the “War of One” will almost certainly be two forces, the United States and Wakanda, who will unite to defeat Hydra in the midst of World War II, probably led by Red Skull and his usual team of lured Nazi scientists and generals.

The Marvel game from Skydance is currently in development.

Why the director of “John Wick” will not shoot “Daredevil” MCU