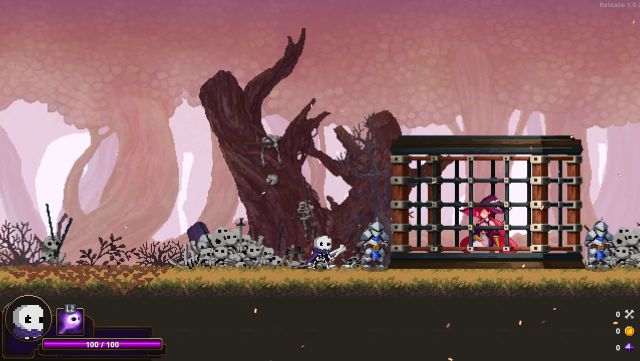 We enter an action roguelite with a simple story, but with a very varied mechanics thanks to the multiple characters available.

On January 21, Skul: The Hero Slayer, released its version 1.0 after spending around 10 months in Early Access on Steam. This 2D action roguelite had already been successful and had more than 7,000 opinions with a very positive rating, certainly something that we understand because it is a video game that leaves you with a very good taste in your mouth. Developed by SouthPAW Games and published by NEOWIZ, we will get to know more about Skul, a small and lonely skeleton who was saved from being captured in an attack on his kingdom. Thanks to him, we enter an action-packed story, with fast and frantic combat and a mission: face the Imperial Army and rescue our king. But if we want to highlight something really interesting about the game, it is the great variety of characters, thanks to the skulls that we find throughout the game they will turn us into another totally different skeleton. However, for the difficulty we will always depend on the RNG of the game, something that is not very well balanced yet.

A quest to save the kingdom

Skul: The Hero Slayer tells a simple story, not very innovative, but with an interesting plot: the human race has just attacked the castle of the Demon King, although it is something that used to happen and it is nothing new. However, this time the adventurers have decided to join forces with the Imperial Army and the “Hero of Carleon” to launch an unprecedented attack against all the demonic forces and try to end them once and for all. By attacking the fortress with overwhelming numbers of troops, they have managed to destroy it completely, capturing all the demons and infecting their territory with the dark quartz. But, we are in luck. Among all the demons, only one has been spared, Skul, a small and lonely skeleton who will undertake a quest to save the king from him and end this corruption.

Everything has come by surprise to our character Skul and it was not expected that this great responsibility fell into his hands, that is why now it will be necessary to create a great warrior, to wield a bone bone and eliminate the enemies that cross our path , all to become a true hero. The story will be told as we progress through each dungeon and will sometimes be through dialogues and other times with cinematics. These cutscenes will feature voices in Korean, but with a highly polished translation into Spanish.

In Skul: The Hero Slayer they have known how to create a roguelite that is different with each race, progressing gradually before dying and being able to achieve a very satisfactory progress curve, although being a real challenge. We will have a rest area and where we will end up once we are eliminated. In this place we will be able to do our operations prior to the next race and, we will also be accompanied by some NPCs that we have saved and have wanted to return back to the Demon King’s castle with us, in addition to always giving us an additional item. Our character will have a limited inventory, but with a satisfactory capacity so that we can enjoy and / or think about what objects to include in the new adventure. Skulls, Quintessence, and Items will be included in this inventory.

The most interesting part of the game is the variety in the multiple characters that we can get to play thanks to the different skulls that we meet, always taking into account the luck with the RNG of the game. We can carry up to two skulls that we will exchange between them at will with a short cooldown, but this action will in turn give us an extra ability. The skulls have original and very fun mechanics, in which they will change our appearance and give us new abilities. There will be characters like The Rider, riding on a motorcycle and expelling flames, a Jester, who drops surprise boxes, or Rock Star, who attacks with his guitar while doing rock. Not all skulls will have the same “value”, as some will be considered normal and others legendary due to their appearance, abilities, and stats within combat.

Battery Times of All iPhones with iOS 13.4 Tested (Video)