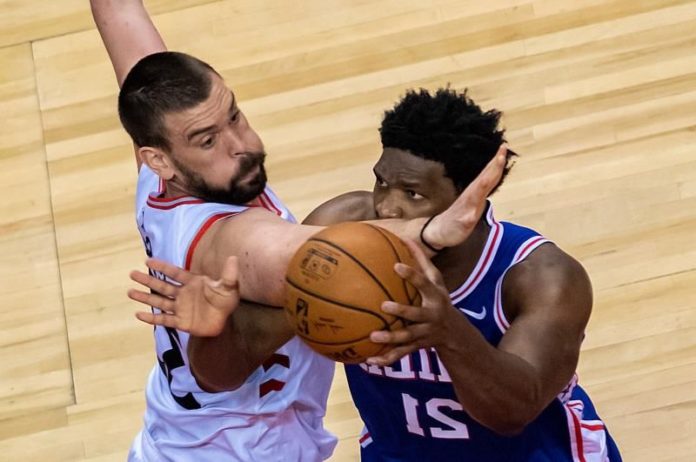 The Philadelphia Sixers and the Miami Heat maintained their status as undefeated in their respective fields at the end of the NBA day and achieve victories.

Cameroonian centerman Joel Embiid got a double-double of 22 goals, including two key free throws with 15 seconds left in regulation, and made 10 rebounds that allowed the Sixers to defeat the Denver Nuggets 97-92.

The Sixers placed their mark at 13-0 in their Wells Fargo Center field and also extended their current winning streak to three consecutive wins.

The forward Tobias Harris contributed 20 points and rookie guard Matisse Thybulle emerged as the sixth player of the Sixers to get 13 points and capture five rebounds.

Another forward, Will Barton counted 26 points that left him as the leader of the Nuggets, who have lost three duels in a row and five of the six most recent.

In addition to the new defeat, the Nuggets also lost the incessant leader, Canadian baseman Jamal Murray, who was injured when 6:49 minutes of the first period remained, when he hit the Australian baseman Ben Simmons, and he no longer returned to the field.

The Heat confirmed that they are serious and have two rookies who have become true winning factors within the team as demonstrated in the victory they achieved by 135-121, in extra time, against the Atlanta Hawks.

Rookie baseman Kendrick Nunn with 36 points – his best brand as a professional – was responsible for leading the comeback of the Heat, who scored 22 points after being down on the scoreboard by six goals and just 59 seconds for playing the regulation time.

Nunn stayed at a point to tie the best rookie brand in the history of the Heat.

The forward Duncan Robinson, a second year who did not even enter the university draw, and the guard Jimmy Butler began the winning comeback after having heard the Hawks base, Trae Young say that “this is over” when he retired to the bench and his team up on the scoreboard with less than a minute left.

Robinson shone by contributing 34 points – his best brand as a professional – and tied the team by scoring 10 triples, while the center Bam Adebayo achieved a triple double-double of 30 points, 11 rebounds – seven defenders -, distributed 11 assists and He recovered two balls.

Butler was also a winning factor to get another triple-double of 20 points, 18 rebounds -16 defensive-, and distributed 10 assists.

Robinson and Butler scored two triples to match the score and the Heat opened the extension with a 16-0 run, which allowed them to establish the highest margin of victory in a game decided on the extension within the NBA since October 31 of 2009, when the Sixers beat the Knicks 141-127.

The triumph of the Heat not only kept them undefeated in their field of American Airlines Arena (11-0) but also began to regain the confidence of fans who see them again play being the leading leaders of the Southeast Division (18- 6) and third parties in the Eastern Confederation.

The guard De’Andre Hunter scored 28 points, while Young contributed another 21 and nine assists as leaders of the Hawks, who left 0-3 their mark in the duels held this season with the Heat.

Escort Devonte Graham had 29 points as the leading scorer for the Charlotte Hornets, who beat the Wizards of Washington 114-107, in a duel of losing teams in the Eastern Conference.

Charlotte’s team concluded a series of five games in their field with a losing score of 2-3.

The base Terry Rozier achieved 17 goals and forward Miles Bridges got 16, including the triple that in the absence of 7.7 seconds by the end of the regulation time gave the decisive advantage to the Hornets.

The Wizards had the reserve forward, the Latvian Davis Bertans, as their leading scorer by contributing 32 points, his best professional mark, after scoring eight triples, and also captured nine rebounds, which in the end did not prevent defeat.

Damian Lillard base had 31 points, including eight triples, and six assists that left him at the head of the Portland Trail Blazers that overwhelmed the New York Knicks 115-87, who suffered the tenth consecutive loss.

The pivot Hassan Whiteside contributed a double-double of 17 points and 15 rebounds and forward Carmelo Anthony, former player of the Knicks, scored another 16 points that helped Portland break a streak of two straight defeats.

The Knicks (4-20), which have the worst mark in the league, were led by power forward Julius Randle, who scored 15 goals.