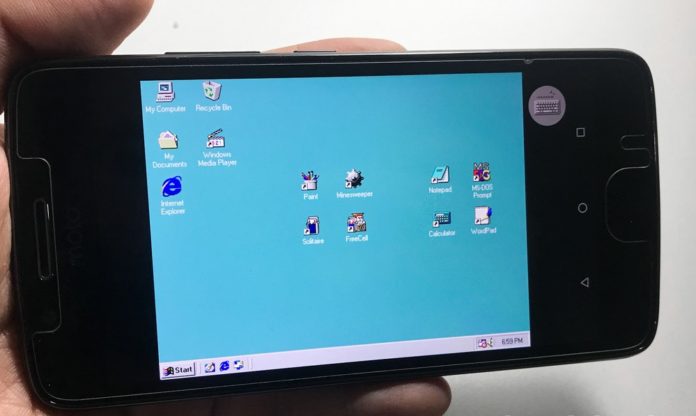 Analog cameras, Windows 98, monophonic ringtones. These are some items that were part of the daily lives of the 1990s and 2000s and left many users missing, but that can be easily remembered on today’s smartphones. Some free apps for Android and iPhone (iOS) allow you to end nostalgia by reviving these programs and services on your mobile screen, making it possible, for example, to draw in Paint and play the classic “snake game” in the traditional molds.

Thinking about it, TechTudo brought together six applications that bring back some of those old services most loved by users that will take you back in time. Check it out in the list below.

1. Application simulates analog camera
The Huji Cam app simulates an analog photo camera from the 80s and 90s on the cell phone, so that the user can relive old memories. To create the effect, the photos captured by the app receive color filters that leave the image with quality similar to that of a 35 mm film. In addition, beams of light simulate the burst flash, to make the images even more similar to the old files.

To make the experience even more real, the app simulates a small display of an old camera on the phone’s screen. However, it is possible to make it larger for greater visibility, as well as switch to the front lens to take selfies. The photos in the app also receive the application of a fictitious date, which, by default, refers to the year 1998. Huji Cam is free and available for Android and iPhone.

2. Application mimics iPod
In December 2019, an app appeared on the App Store with the proposal to bring back the design of the iPod player to the mobile screen. Rewound is a music streaming service for iPhone that uses skins to transform the layout, and has among the options a theme that displays a faithful copy of the screen of the Apple device. On the screen, the user has available the list of available songs and the Click Wheel, a circle-shaped slider that made the iPod famous at launch.

Apple, however, removed the app from the App Store claiming that the service copied the layout of the iPods, charged for syncing with Apple Music and could still be mistaken for an official Apple product. The developer, who had plans to release the skin for synchronization with Spotify, seeks sponsorship to develop a solution for the web of his iPod player.

3. Paint on the phone
The classic Windows drawing creation software can also be accessed by cell phone. The Paint 98 application, available for iPhone, is a recreation of the program and allows you to access all the tools of the traditional panel, such as brush, pencil, eraser, paint bucket and spray, as well as choose two different colors to apply to the white screen. It is also possible to write texts and use graphic shapes, such as lines and rectangles.

To draw, the user must select the “mouse” button he wants to use and drag his finger on the screen – each button represents a color, just like on the computer. It must be said that drawing with your finger on the small screen of the cell phone is not so simple and the results may not be as accurate, but the experience will leave the most nostalgic satisfied. At the end, you can download the art or share it on social networks.

4. Old cell phone ring
The old monophonic and polyphonic ringtones are still very much present in the memory of cell phone users from the early 2000s. With that in mind, the Old Phone Ringtone app, available for Android, offers dozens of sounds that became famous on Nokia and Siemens models At that time. In addition to these, it is also possible to hear ringing tones typical of landline phones.

The ringtones can be played as many times as you like, and can also be downloaded for use as the official ringtone of the user’s smartphone when receiving calls, alarms, notifications or calls from a specific contact.

5. Windows 98 simulator
The Win 98 Simulator application is a complete Windows 98 emulator for Android phones. The experience is extremely faithful to the system and already starts when opening the app, when the user can hear the classic startup sound. From then on, a complete computer screen takes over the entire smartphone, allowing access to all Microsoft OS resources, such as the Start menu, Windows Explorer, games like Minesweeper and FreeCell, accessing MS Dos, Windows Media Player, the “My Documents” folder and even Internet Explorer, where you can access real websites.

The mouse is controlled with the finger on the screen, and clicks are triggered by the volume up and down buttons. Longing for Windows 98 will find in the application a quick way to kill the longing for the classic system. Obviously, when the app is closed, it also plays the Windows shutdown sound.

6. Nokia’s “snake game”
The classic Snake game can also be installed on current smartphones running Android or iOS. The Snake 97 application faithfully reproduces the game, with monochrome screen and traditional monophonic sounds, and displays on the screen a replica of the physical keyboard of old cell phones, so that the user has the same feeling of using the buttons to control the snake, as in the past.

In the settings, it is possible to choose between seven options of old cell phones, determine the speed of the animal and the volume of sounds. The user can play in nine original levels of difficulty, in addition to three new options.

Apple is on the agenda with its vulnerability!

Autumn season: The 8th season of The Blacklist on NBC

Kylie Jenner in the mountains: she poses in a dream setting!...

EA Sports featured ‘Madden NFL 21’ with Lamar Jackson on the...

New Battlefield will arrive for PS5 and Xbox Series X in...

Xiaomi’s New Transparent TV Has Been Sold Out

PC Version of Death Stranding Postponed Due To Coronavirus (Again)