Home Entertainment Six Days in Fallujah: the keys to the controversy of the game... 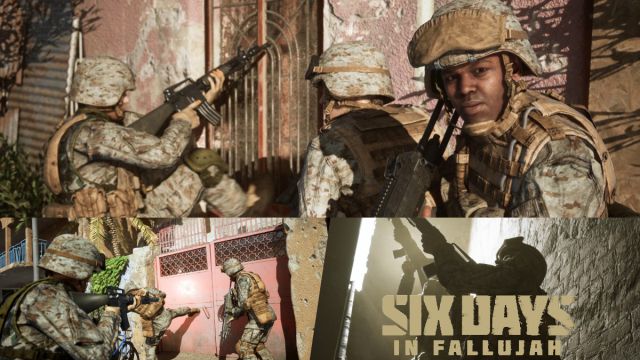 Six Days in Fallujah: The game was canceled by Konami a decade ago, but its resurrection in 2021 has brought with it the same moral dilemmas.
The Iraq War began in 2003, the year the United States and its international allies invaded the country under the pretext that Saddam Hussein’s dictatorial regime had weapons of mass destruction. On October 21, 2011, the then US president, Barack Obama, announced the withdrawal of troops from that territory. Six Days in Fallujah, a video game that has returned to the media spotlight today, was canceled prior to that date. Given that it was a real conflict and very close in time, the controversy did not take long to emerge. At that time, Konami was the company that was going to be in charge of publishing it, but after analyzing the situation they backed down. The project was left in limbo, although Victura Games has rescued it and is willing to commercialize it again. A decade later, the controversy is far from dissipating. What are the reasons?

Atomic Games, the original developer, broke down after the project was canceled, although Victura was founded by Peter Tamte, the former CEO of the original team. Development has passed into the hands of Highwire Games, a small studio that is developing the project with current systems in mind. To understand what is happening in the present it is important to review the events of the past, because they are practically the same.

In 2009, Konami reported on its decision not to launch Six Days in Fallujah: “After analyzing the reaction in the United States and learning the opinion about the game through phone calls and emails, we have determined not to sell it.

The arguments that Atomic Games used to defend their production were not very different from those they use today. Tamte argued that “any type of medium has grown up producing content about real events”, those whose potential lies in their relevance. “Movies, music, and television have helped people learn about the complex issues of our time. Are we only manufacturers of high-tech toys or are we communication companies capable of producing content as relevant as movies, music and television? ”.

Different perspectives or just the North American one?

The point is that all history has different prisms. However, at Six Days in Fallujah we manage US Marines, so we live the story from that point of view for most of the time. In that original project, Tamte said that when the soldiers returned from Iraq, some asked them to “tell their story through the most important medium”: it referred to video games. “Six Days in Fallujah is not about whether the US and its allies should have invaded Iraq. It is an opportunity for the world to learn the true stories of the people who fought in one of the world’s greatest urban battles of the last half century ”. The creators of the titles assert even now that the idea is not to investigate the whys, but to reflect the personal stories of the protagonists who have shared their experiences.

The game concept has not changed much. In the press release announcing his return, the team collected the statements of Eddie García, one of the soldiers wounded during the battle: “Sometimes, the only way to understand the truth is to experience the facts for yourself.” commented the sergeant, the same one who proposed the original project. “War is full of hard and uncertain decisions that are difficult to understand if we see them on television or in a movie, where they already make the decisions for you.” Video games can give us a new perspective on the events that occurred in reality in a way that other media cannot teach us ”. Now it is added that in addition to the soldiers, civilians have participated in the creative process with their personal stories, photographs and video recordings. The playable part will be complemented by a documentary.

The main criticism that has prevailed is that the content will be biased and very in favor of the interests of the United States, since everything seems to indicate that the focus will be centered on the Marines. Victura recalls that “multiple countries” were part of the city’s forces. They argue that in the game there will be “some very intense stealth missions”, in which we can play an Iraqi civilian. The editor has also denied that the project is a propaganda tool at the service of the US Government or a recruiting method: “The US Government is not involved in the game and there are no plans to use it to recruit,” they mentioned. “The Iraqi Marines, soldiers and civilians who have helped us do so as citizens, the game is being independently financed.”

Politics as an inherent part of the video game

Another problem is that as in the past, the team led by Peter Tamte has tried to avoid that the video game emanates political issues. This specific aspect affects many companies in the sector such as Ubisoft or Activision, which have said actively and passively that their games are simply entertainment products that do not intend to go beyond that. “For us as a team [the game serves] to help people understand the complexity of urban combat. It is about the experiences of this individual who is there for political reasons. And we want to show how the decisions politicians make affect the decisions [a Marine] needs to make on the battlefield, ”but without questioning those political decisions. Tamte has said not to be interested in “making a political comment” within the framework of the reflection of whether going to war was a good idea or a bad idea.

James Gunn Responds to Rumors That Wonder Woman Is Excluded From...

Metal Gear: Oscar Isaac Reveals His Love for the Franchise