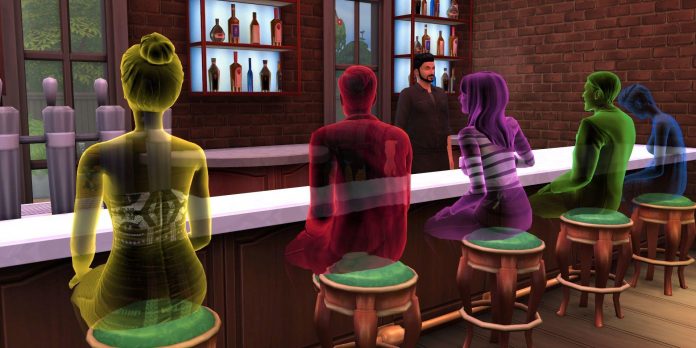 A Sims 4 user has discovered that the last death in the game is associated with a new ghostly Easter egg. There have always been many different ways to kill Sims in The Sims 4, but new deaths are often added to the game with new DLC releases. As new demises appear in The Sims 4, players are required to experiment and learn everything they can about each of them.

In The Sims 4, the death of a Sim can be caused by both real and more far-fetched reasons. These deaths range from things like starvation and electrocution to killer rabbits and blowfish poisoning. Sims can return as ghosts, and the way they died will affect the appearance and abilities of their spirit. For example, the ghosts of Sims who died in the fire will flicker and can set fire to household items. Until recently, a minor but common complaint about The Sims 4 was the size of the telescope: only one telescope was available for purchase, and it was a large observatory that occupied several places. However, the recent Sims 4 update added a smaller telescope along with a new death based on the subject: death by meteorite impact.

Reddit user abidoang discovered that the new death in Sims 4 was accompanied by a fun new Easter egg. The player shared a screenshot of his sim, who died from a meteorite impact, showing that there was a small meteorite inside his ghostly form. The red mass in the center of the sim’s chest almost exactly corresponds to how meteorites falling from the sky appear in the game, and, according to the user, a ghostly meteorite even rotates inside the ghost’s body — or lack thereof.

This fun new Easter egg has similarities to several other ghost appearances where the cause of death is displayed in the ghost sim’s chest. Sims killed by a vending machine from Sims 4: Snowy Escape will have a rotating soda can in their ghosts, vampire sims killed by sunlight will have the sun, and sims killed by chickens, rabbits, or puffer fish venom will display the creature that ended their lives. Although this formula has been used before, it’s always funny in the game that ghosts constantly remind players of the reason for their demise by wearing it so prominently.

Many Sims veterans consider death from a meteorite to be a classic death, and probably many are happy that the fan-favorite demise is finally depicted properly. He first appeared in The Sims 3, and before that in The Sims 2 there was a very similar death caused by a satellite falling from the sky. It may seem strange to players to rejoice at how certain death is depicted, but given how much time Sims 4 fans spend killing their Sims, it’s not surprising that some will feel nostalgic for deaths from past games. This funny Easter egg for a new death shows that The Sims 4 developers know how much players like to kill their Sims creatively and effectively.