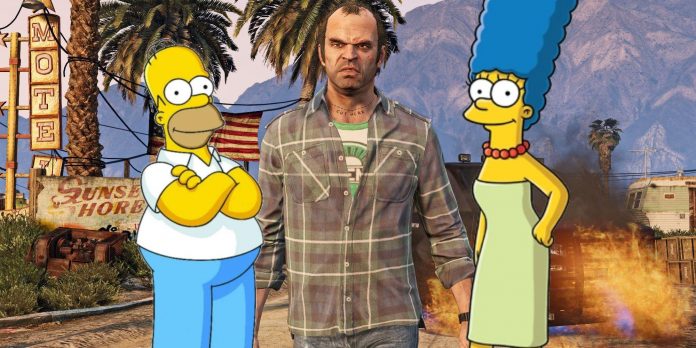 The fan-made remake of The Simpsons: Hit & Run is gaining momentum online as development continues, and now the game has the ability to switch characters in the same way as in Grand Theft Auto 5. The original character change function was used to make it easier for the player to use the three main characters of GTA 5: Michael, Franklin and Trevor.

The Simpsons: Hit & Run is something of a cult classic. Released in 2003, it remains to this day one of the most popular Simpsons games ever released. At its core, Hit & Run is a parody of the Grand Theft Auto games, and many people who have played it believe that it has implemented the concept very well. Many popular characters from all over Springfield, including the titled Simpsons family, must complete a number of missions during the game on an equally large number of vehicles. The continued popularity of the game means that even almost two decades after its release, fans are still hoping for news about Hit & Run 2 with or without the participation of EA, the current owner of intellectual property.

However, YouTuber reubs is not content with simply waiting for the sequel. They are creating a full-fledged remake of the original game on Unreal Engine 5, a remake that now has even more references to GTA than in the original. While coding the camera controls in the game, reubes noticed that zooming out from a character to a bird’s-eye view resembles the graphics of changing characters in GTA 5. Inspired by this, they then took steps to replicate this in their Hit & Run remake and have now demonstrated this feature in a new video. Although there is no official update for Hit & Run 2, this update for the unofficial remake largely quenches the thirst of fans.

Despite the fact that the graphics of changing characters in the games are clearly similar, it is still visually different. This is partly due to the programs involved; as reubs notes, GTA 5 reloads its map when changing characters, while the Unreal Engine 5 Hit & Run remake allows them to skip this step in their own project. It should be noted that the original Hit & Run did not support character swapping, as each playable character in the game was tied to one specific level (or two, in the case of Bart and Homer). However, it seems that reubs is going the other way for his project. Now that pedestrians and vehicles are also present in the remake, many fans will be interested to know if there will be a similar update for The Simpsons: Hit & Run’s worst missions, most of which are time trials.

Watching the progress of this remake makes it very appealing to any fan of The Simpsons: Hit & Run. reubs is very well versed in what they do, and learning about their design process is the perfect combination of information and entertainment. They draw inspiration from Grand Theft Auto, as in the original game, this is another argument in their favor. The changes made by reubs to the original game will surely find fans who want the project to become official. At least, given the fact that another video with an update is already in development, you won’t have to wait until there is even more content dedicated to this amazing remake of the open-world Hit and Run game.

My Hero Academia: Fans Believe There Is Already A New Best...