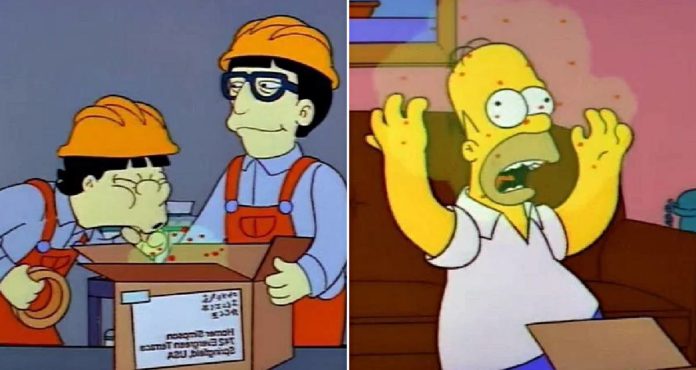 The Simpsons, one of the most famous cartoon series in the world, has always been the center of attention. The cult animation, which knew that Donald Trump would be elected as the President of the USA 16 years ago, was claimed to anticipate the new type of corona virus outbreak, which this time wreaked havoc on the planet in 1993.

The Simpsons, which started broadcasting in 1989, has the title of the longest running series in the world television history with its 31 seasons consisting of 673 episodes. The legendary animated series created by Matt Groening is often brought to the agenda with its future prophecies. So much so that a new series of seasons can come out of The Simpsons’ predictions so far.

Many things such as Donald Trump’s election as the President of the USA, Disney’s acquisition of FOX and the disappointing finale of Game of Thrones became the subject of The Simpsons before it took place in real life. This time, it was claimed that the legendary series predicted the corona virus (COVID-19) pandemic that took the whole world under its grip.

American television writer Mike Reiss shared a video on his personal Twitter account that pointed out that The Simpsons predicted the COVID-19 outbreak spread from China in 1993, in the episode “Marge in Chains” published in 1993.

Marge in Chains, the 21st episode of his fourth season, is about a mysterious virus outbreak that occurs in the city of Springfield. So far everything is normal, but that section, to be shared on social media and even by mounting various news channels in Turkey has caused a great illusion.

The verification platform, which analyzes what information on the Internet is right and wrong, based on open sources, confirmed the claims that The Simpsons previously knew the COVID-19 pandemic in China, and revealed that the truth was not as claimed. Accordingly, the outbreak called ‘Osaka flu’ in the series has been changed to ‘Corona virus’ in some places in the section.

Outbreak scene in The Simpsons’ Marge in Chains
In addition, China was cited as the center of the epidemic. However, the cargo carrying the virus in the series was not from China, but from Japan. One of the employees expresses the flu when packaging the orange juicing machine and sneezes after telling his colleague “Please don’t tell the manager I have the flu”. The viruses that enter the box manage to reach Springfield and cause a big epidemic in the city.

But as claimed in social media, no one is dying from the virus. Also, the main focus of the episode is not epidemic. The confirmation also states that in May 1993, when the episode of Marge in Chains was published, the Hantavirus epidemic called “Four Corner Virus”, which affected the states of Utah, Colorado, Arizona and New Mexico. In short, the episode, which was launched as ‘prophecy’, was probably inspired by an event that happened at that time. Therefore, it is not possible to establish a connection between the chapter in question and the events we experience today.

Coachella 2020 could be canceled or postponed due to coronavirus