Home Entertainment Silent Hill Returns ?, Yes, But On A Series Of Skateboards 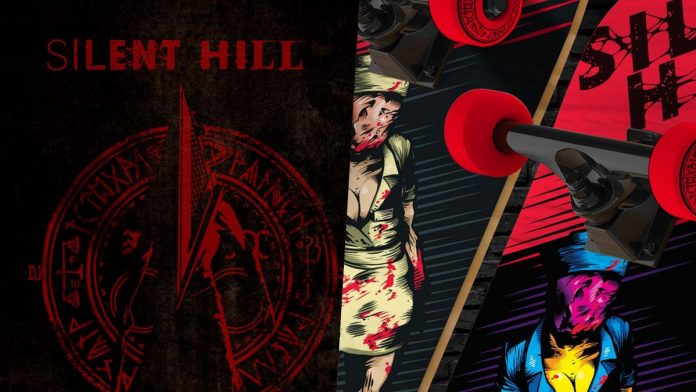 Silent Hill: Konami’s official store announces a merchandising pack amid rumors of a new video game, which has not been confirmed. We’ve gotten used to seeing Silent Hill as part of crossovers from other games, but now the meme takes on a new form. In recent days, rumors have exploded again, especially after Blue Box Studios, the creators of Abandoned, hinted that they were working on something related to the saga. Shortly after, the official Konami store shared an image with Pyramid Head. Everything seems to indicate that neither one thing nor the other, the Japanese company has revealed that the mystery consists of … some Silent Hill skateboards!

“Something evil will roll into our store next week,” they post on social media. “We are launching a Silent Hill merchandising collection along with this incredible series of skateboard decks to celebrate …”, and they don’t finish the sentence. The official thing is that as of June 23 it will be possible to reserve this curious article, which has the drawing of one of the nurses stamped at the bottom of the table. It is available in two different versions, as can be seen in the image that accompanies the tweet.

As can be read, this limited series of custom skateboard decks featuring the Silent Hill print will be available for pre-order while supplies last. It is not detailed how many more products they will make available to customers.

And what about games?

Nothing is known about a possible return of Silent Hill. Konami has kept mum and has not officially announced any new installments. VGC sources said that the company was working on several projects, but all of them outsourced to other studios. In any case, to date the saga has only been recovered in some crossovers. This uncertain fate is also shared by Metal Gear Solid. Still, Konami explained before E3 2021 that it is working on key projects.

Silent Hill will also return to movie screens. The director of the first film, Christophe Gans, is outlining the new film.