Home Entertainment “Significantly less than expected” — Liverpool’s Allocation For The Away Match With... 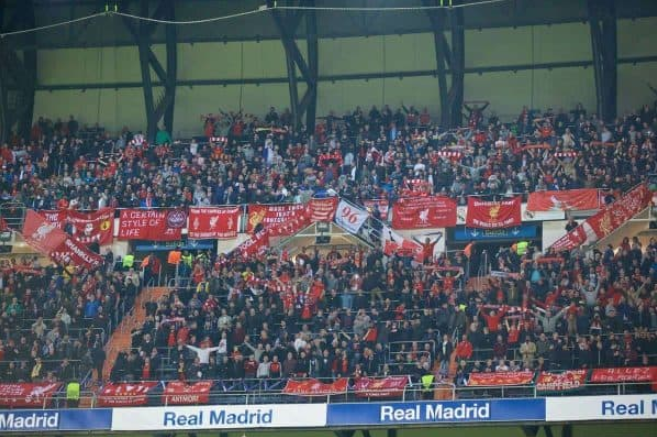 Liverpool confirmed that they received only 1,800 chips for the second leg of the 1/8 Champions League final against Real Madrid at the Bernabeu in March.

According to them, this number is “significantly less” than they originally expected for this game.

The home stadium of Real Madrid has recently been renovated to increase the total capacity of the stadium to more than 80,000 people, and although it has not yet been completed, fans have been able to attend matches with a reduced capacity of up to 60,000 people.

In a statement released on Tuesday, Liverpool said:

“The club has contacted UEFA and Real Madrid about the reduction of allocations to understand the reasons for this decision. Spirit of Shankly, the official Supporters’ Trust Fund and the Liverpool Association of Disabled Fans have also asked the club to voice their concerns and asked to maintain dialogue throughout the process.

“LFC strives to have as many fans as possible in stadiums for away European matches and continues to develop its systems and processes for filling seats at every away game.”

Real Madrid’s last Champions League game at the Bernabeu was a 5-1 victory over Celtic, who also received a minimum allocation of 1,848 tickets.

Fans are understandably unhappy with the distribution the club has received:

Give them the same amount and stick them in the main upper.

I know their stadium is under redevelopment but they still have a 60k plus reduced capacity, so the allocation is a joke. We should do the same with them in return.

Carlisle took more than that to Bradford last season 😭

Work on the reconstruction of the Bernabeu has been underway since June 2019, and it was initially assumed that they would be completed by this month, December 2022.

However, the Covid pandemic has disrupted progress, and no date has yet been set for the official opening of the newly renovated stadium.

When Liverpool played Real Madrid away in the 2020/21 Champions League campaign, the match took place at the Alfredo Di Stefano Stadium, which was their home stadium while work continued at the Bernabeu at that time. They returned to the Bernabeu last September.

Liverpool says it will provide fans with more information when the distribution of tickets is confirmed.