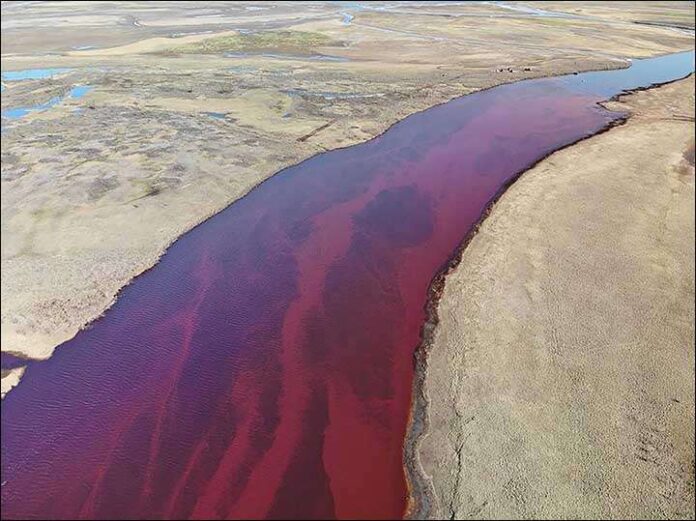 A state of emergency was declared on June 3 in Norilsk, in the Krasnoyarsk territory of eastern Siberia, after 20,000 tonnes of diesel escaped from a tank on an industrial site. The leak, which occurred on May 29, colored the Ambarnaïa River and its tributary Daldykan in orange red, and impressive videos show the river water igniting on contact with a spark. The causes of the leak were not clearly established, but according to the mining company Norilsk Nickel which operates the site, the reservoir could have been damaged by the collapse of the soil caused by the thawing of permafrost due to global warming.,

The oil leak could in any case turn into an ecological disaster. According to the General Prosecutor’s Office of Russia, petroleum products were detected in the Ambarnaïa river, which supplies drinking water to a district of Norilsk, Lake Piassino and the Piassina river which flows into the Kara Sea. The concentration of oil in the rivers concerned is “several tens of thousands of times higher than the norm”, recognized Svetlana Radionova, the director of the Russian Service for the control of the exploitation of natural resources during a meeting of emergency.

Nearly 20 km of rivers are polluted and 6,000 tonnes of oil have penetrated the ground. Floating dams were installed and absorbents poured into the river to limit the damage. According to Greenpeace, this accident is the biggest ecological disaster in the Arctic since the Exxon Valdez in 1989, which had caused a huge oil spill in Alaska.