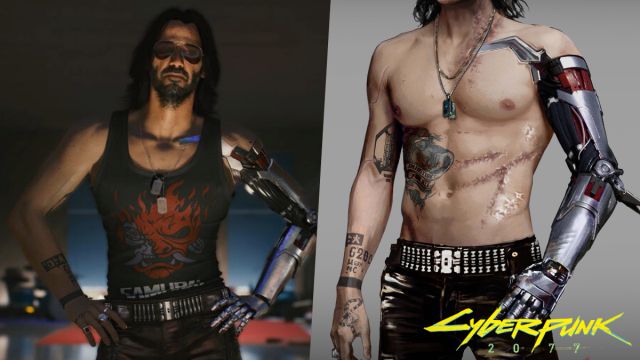 A series of concept arts shared by one of the developers of CD Projekt RED hints at some old designs. Keanu Reeves, the star of the Matrix, John Wick or Dracula, among many others, surprised the players when he appeared at the Microsoft conference during E3 2019.

“You’re breathtaking”, he then delivered before an audience that broke into applause . The actor announced his presence in Cyberpunk 2077, the new production of CD Projekt RED, the also creators of The Witcher 3: Wild Hunt. However, the character he plays, Johnny Silverhand, did not always share facial features with the performer, as can be seen in the conceptual arts shared by artist Lea Leonowicz.

Although the images published on Artstation do not offer any type of information in this regard, it is obvious that these designs are different from those that have been captured in the final game, not only because the character’s appearance is different, but because beyond facial features, changes can also be observed with respect to the current Johnny Silverhand. Even so, he retains other characteristics of him, such as the mane or the metallic arm (obvious, considering the name of the character) that walks throughout Night City.

Mending a launch full of problems

CD Projekt RED, meanwhile, continues to work on improving the game, which came out dragged by console performance problems. The situation got to such an extent that Sony Interactive Entertainment made the decision to remove it from the PlayStation Store until the build was more stable. The study offered the refund money, but asked for a vote of confidence, since they are convinced that they will be able to reverse the situation.

Cyberpunk 2077 went on sale last December on Xbox One, Xbox Series X, Xbox Series S, PS4, PS5, and Google Stadia. The Polish developers recently published a video, in which in addition to apologizing, they have shown their roadmap. The patch for the new generation consoles is still scheduled for 2021, although everything seems to indicate that it will reach the end of the course.

From the creator of Silent Hill to mix game, terror and...