Home Entertainment Showrunner teases the villains of the 7th series of Future Of Strange... 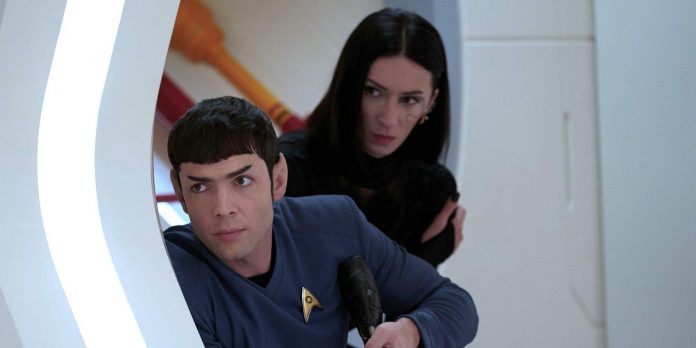 The “Star Trek: Strange New Worlds” showrunner teases the future of two villains who were introduced in episode 7. “Strange New Worlds” is the newest series in the increasingly vast “Star Trek” universe of the Paramount+ streaming service. The show starred Anson Mount as Captain Christopher Pike, the man who was at the helm of the aircraft carrier Enterprise before Captain Kirk stepped aboard. Along with several other familiar faces, including Celia Rose Gooding as Uhura and Ethan Peck as Spock, Captain Pike is one of the first Starfleet captains to explore the far reaches of space. In the general timeline of the universe, this show takes place after the events of “Star Trek: Discovery” and before “Star Trek: The Original Series”.

Last week, on Thursday, June 16, 2022, the 7th episode of the 1st season of “Strange New Worlds” called “Serene Squall” aired. In this episode, Spock meets and quickly gets close to a new character, Dr. Aspen, played by Queer as Folk actor Jesse James Keitel. However, in a shocking turn of events, when pirates capture the Enterprise in dangerous territory, Aspen reveals that they are actually a pirate known as Captain Angel. Captain Angel was obsessed with the idea of freeing a Vulcan prisoner from the ship, who was later revealed to be Spock’s half-brother Saybok, a controversial character first introduced in the 1989 critically acclaimed film Star Trek V: The Last Frontier.

During a conversation with Inverse, the showrunner of the Star Trek: Strange New Worlds series, Henry Alonzo Myers, talked about the future of the two main villains, who can be seen in episode 7. a charismatic villain who outshines everyone and whom we want to see again and again.” He was a little more silent about Saybok, saying that—if the character reappears in the series —”we’ll see his face.” Read his full quote below:

It was an idea; to create a charismatic villain who outshines everyone and whom we want to see again and again. We would love to see more of Angel, absolutely…

When and if we see Saybok again, we will definitely see his face.

After today’s premiere of the 8th episode of The Elysian Kingdom, there are only three episodes left in the 1st season of Strange New Worlds. Given that Myers expresses a desire for Captain Angel to return, rather than a certainty, it’s unlikely that fans will see them sooner. the final is on July 7. However, his caution in revealing more information about Saibok probably means that the character, who has only been seen from behind so far, could play an important role at the end of the season.

In any case, “Star Trek: Strange New Worlds” definitely creates a strong list of villains, both new and familiar. The good news for fans is that the show has already been renewed for a second season, which is currently in production. There will probably be plenty of opportunities to explore these villainous characters in the future when they cross paths with the Enterprise crew, regardless of whether they can reappear before the end of the first season.