Home Entertainment Should I buy ASUS ROG Phone 6 Pro instead of ROG Phone... 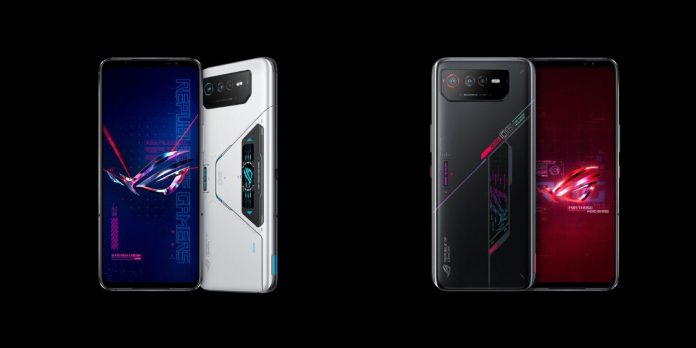 As for the design, the new ASUS gaming phones continue from where their predecessor ROG Phone 5S left off. Both phones look like cyberpunk with an engraving on the back and blue or red color accents around the rear cameras and on the buttons. Nevertheless, they are distinguished by a great constructive difference. The ROG Phone 6 has a customizable RGB backlight on the back, and owners can mix colors and lighting schemes of the ROG matrix logo, creating millions of combinations. On the other hand, the ROG Phone 6 Pro replaces the RGB backlight with a two-inch color OLED display, and also allows users to choose from various animations to display on the screen or create their own. In addition, both phones have an IPX4 rating and can be purchased in black and white.

The similarity between ROG Phone 6 and ROG Phone 6 Pro remains in their characteristics. Both phones feature a 6.78-inch AMOLED display with an updated refresh rate of 165 Hz and a touch sampling rate of 720 Hz. In addition, the screens are protected from scratches and drops by Gorilla Glass Victus. They also support HDR10+ and have DC dimming. The two phones are based on the Snapdragon 8+ Gen 1 processor, which is combined with 8 GB, 12 GB or 16 GB of RAM and up to 256 GB or 512 GB of memory on the ROG Phone 6. In contrast, the ROG Phone 6 Pro comes in a single configuration with 18 GB of RAM and 512 GB of internal memory. As for the front camera, the configuration on both devices is the same — the Sony IMX766 50 MP main camera with the ability to record in 8K format, a 13 MP ultra-wide-angle camera and a 5 MP macro camera. There’s also a 16-megapixel camera on the front for video calls, selfies and live broadcasts.

ASUS has equipped both phones with symmetrical dual front-facing speakers. There is also an audio jack for connecting a gaming headset. To further improve the sound quality, ASUS has entered into a partnership agreement with Dirac to optimize the audio output on two phones. They also support Qualcomm Snapdragon Sound and adaptive aptX codec for high-resolution and ultra-low latency audio even when connected to Bluetooth headphones. Both phones are equipped with a 6000 mAh battery, which is divided into two 3000 mAh cells, and with the included 65W adapter, they can be fully charged in 42 minutes. In addition, ASUS also allows you to customize the charging functions. Users can control the charging speed or refuse to charge during gaming sessions. During bypass charging, the phone receives power directly from the power adapter, not from the battery. Owners will also find the same connectivity options across the board, such as dual SIM cards, WI-Fi 6E, Bluetooth 5.2 and NFC. They also have a fingerprint scanner built into the display, Face Unlock and ultrasonic sensors for the improved AirTrigger 6.

ROG Phone 6 and ROG Phone 6 Pro are compatible with the same accessories, including an improved cooling fan and a Kunai 3 gamepad. Thus, the only differences between the two phones are the OLED display on the back of the professional model and its additional RAM. Frankly, they don’t seem to be sufficient to call it a “professional” model, and there may be little they can do to convince buyers to choose it instead of the standard version. The rear display will be turned away from the user most of the time, and 18 GB of RAM is too much for any Android app or game. However, ASUS charges 999 euros for the ROG Phone 6 with 12 GB of RAM and 256 GB of memory, and the ROG Phone 6 Pro with 18 GB of RAM and 512 GB of memory will be sold for 1299 euros. Both phones will be available in the US, but details about pricing and availability have not yet been disclosed.

Better Call Saul Season 6: What we still have to see...