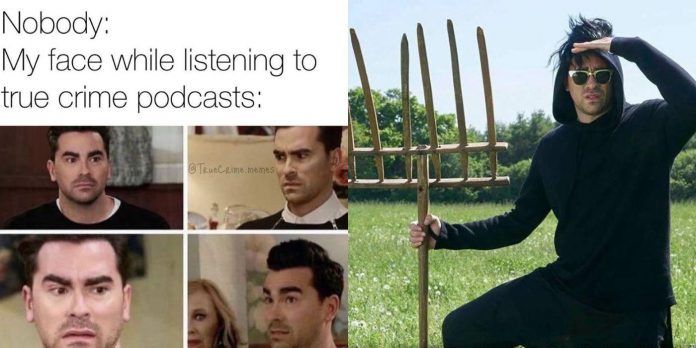 Although Schitt’s Creek ended in 2020, the stars from the series have gone on to do incredible things. This July, Dan Levy (David Rose) announced the arrival of his new production company, Not a Real Production Company, which will go on to produce TV and film projects. The second season trailer for Annie Murphy’s (Alexis Rose) Kevin Can F**k Himself was just released. And Sarah Levy (Twyla Sands) recently gave birth to a son whom she named after her father (Eugene Levy), James Eugene.

With a busy calendar for the award-winning cast, Schitt’s Creek fans are excited to see where the future takes their favorite cast. In the meantime, fans have rewatched and binged Schitt’s Creek countless times and have created memes thanks to the characters’ facial expressions and the situations they find themselves in. One of the more popular faces that have got tossed onto memes is the one and only David Rose.

It’s Good To Be Self Aware

This meme summed up David Rose’s character perfectly because it was a situation that fans could see him and his husband Patrick. @OneAwkwardMom created this meme showing self-awareness when a partner eventually admitted defeat and announced their partner was correct in an argument.

Even though David was sarcastic, his quotes were lovable and it was hard for those around him to be mad at him for very long. When people admitted their faults around David, he was not one to sugarcoat things to make them feel better. Instead, he used refreshing honesty.

David And Alexis May As Well Be Royalty

Rohita Kadambi shared this meme on Twitter that was later reposted on Instagram by @Ew_David_Forever_. The meme compared Brittain’s Prince George and Princess Charlotte to everyone’s favorite brother and sister duo, David and Alexis Rose.

David and Alexis didn’t always have the best brother and sister moments but they did pull through for each other when they needed it. They were harsh with one another and picked on each other at the motel but they knew the other well enough to know when it was time to be compassionate instead of petty. David had as much fun with Alexis as he did loathing her existence. The writers on the show perfected the brother-sister dynamic, and it’s proven by the reactions of young royalty.

David Had No Issues Telling People No

This is one of those David Rose memes that are too hilarious for words. Even though David loved his sister, he was bothered whenever Alexis asked him for a favor or advice. They were similar but when about life differently.

When they found themselves in Schitt’s Creek, David did what he could to make the family money. Meanwhile, Alexis complained about her reality and focused on her love life instead. She didn’t get a job until months after the fact. When David eventually had the upper hand financially, he had no issues with saying “ew no” to any and everything Alexis asked of him — just like this meme created by @Schitts_Creek_Fansclub.

David Was Probably Late To Most Classes

This meme by @SchittsCreekBTS nailed this meme. If viewers did see a situation where David was late for class with a Starbucks coffee in hand while looking fabulous, it would be safe to assume he was late because he took the time in his day to wait in line for coffee.

Depending on the situation, David would either be honest about his need for caffeine or make up an extravagant lie as the meme suggested.

The Face Of Shock And Awe

David Rose’s facial expressions were an art form. Whether it was raising his eyebrows or his jaw hanging open — viewers knew what David was thinking before he said anything.

It’s unknown what kind of podcasts David listened to (or would listen to) but it’s unclear if murder podcasts would be David’s go-to — simply because of his distrust in people to begin with. However, if he did listen to true-crime podcasts, his face would certainly look like the ones shown in the meme created by this Instagram account. Interestingly enough, David’s facial responses to things became less expressive the longer he stayed in Schitt’s Creek; presumably, David matured throughout the series and fewer things surprised him.

When You’re Unsure Of How To Solve A Problem

David wouldn’t have made the best therapist because he was often shocked or disgusted by the things strangers told him. Whenever Jocelyn or Roland needed advice David always looked bothered or disturbed that they chose him to confide in.

@OneAwkwardMom joked that if David was a therapist, his response would look something like this. This moment was similar to the time Roland asked David to help him with an outfit to gift to Jocelyn. David wanted no part in the roleplaying scenario Roland described to him and would have offered a muffin to get out of that conversation.

When David became serious with Patrick, he told him that he was not the “kids type” and didn’t want to have kids of his own. The topic was never an issue for the couple until Patrick had his wisdom teeth taken out and talked about wanting a baby with David.

David made it clear that the idea of fatherhood scared him and it wasn’t something he was interested in. Knowing this, the meme shared by @Be_Kind_Of_Witty is a perfect description of what life would be like for the couple if they did ever decide on children. David would need some much-deserved personal time without kids around. In the end, their agreement on a life together made Patrick and David soulmates.

David didn’t appreciate the budget or business talks with his father. When the family moved to Schitt’s Creek, David got a job at a supermarket before working at a nearby boutique. He learned a lot about business working on the ground floor and later got some harsh business lessons from his dad when he learned what a tax write-off was.

RELATED: 10 Business Lessons Thanks To The Roses

When he later opened his own business, he received some much-needed help from his new business partner (and partner), Patrick. While finance discussions were important and part of the business, David wasn’t always interested in them because the budgets weren’t like they used to be when he was wealthy and living in New York City. This meme by @SchittsCreekNetflix was David in a nutshell.

@Kiss_My_Memes shared a meme created by @Jacana_Mommy that captured David’s character to a T. David was annoyed easily, however, that didn’t mean that he wasn’t willing to put on a smile and help those who needed him from time to time.

Like the meme, as much as David would most likely be annoyed by waiting for someone to take a picture of him, he would smile or pose for a picture when the timing came to it. And if he didn’t look great in the picture, David would have no qualms with telling the photographer to retake it until he looked right.

David’s Face Said It All

David’s facial expressions could be used for any meme. In this instance, screaming internally when being asked an obnoxious question was what David did best. David didn’t encounter too many customers while working at the Blouse Barn but he did when he opened Rose Apothecary.

He tried not to judge his customers but his face always ruined it. It was times like these that made him one of the more relatable characters because viewers related to screaming internally when things didn’t go the way they were hoping. Eventually, the things David wanted in season 1 came true by the finale, but that didn’t mean it was easy not to make faces like these.