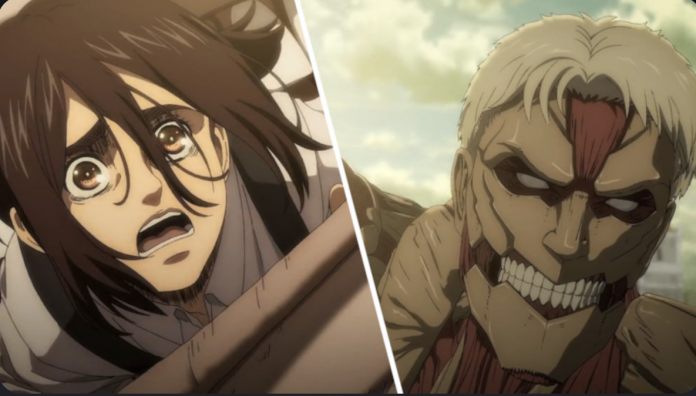 The team behind the latest season of Shingeki no Kyojin shared a new trailer for the anime, as well as its premiere date.

Something that remained to be known about the return of the fourth season of Shingeki no Kyojin was when he would return. Well, this is already known: the official website revealed that it will be on January 9, 2022.

It was known from before that it would be in that month, but not the exact date. But in addition to this information, a new advance was shared. Although this video lasts little more than half a minute, it allows us to appreciate part of what can be expected.

Shingeki no Kyojin returns and in spectacular fashion

What is seen is the clash of forces between Eren Jaeger’s supporters against those who oppose him. This is represented very well thanks to the combat between the Attack Titan against the Armored Titan.

It is now that both rivals will fight face to face again. But they are not the only ones entering the scene. The infamous Beast Titan can also be seen, as well as the Jaw Titan and Freighter Titan, who will also engage in battle.

Other characters are seen on stage, such as Levi and Mikasa Ackerman, as well as Hange, Zeke or Gaby. However, they are mostly referenced as it happens very fast.

They all have their respective roles in the final part of the fourth season of Shingeki no Kyojin. The same cast of voice actors and actresses is confirmed for the new episodes. The same can be said of MAPPA, the study in charge.

An advance that reveals well-known characters

Something that is appreciated a little in the advance of the anime is the use of computer-generated graphics. Or at least that’s the impression it gives. That’s something that some fans didn’t like very much in the previous episodes of season four.

Hopefully MAPPA has polished its technique in that regard. Although what is seen in the video is not bad, it is still perceptible. But there is time for the studio to dedicate the necessary time to anime.

The first episode of the second half of the fourth season of Shingeki no Kyojin will be the 76th of the complete series, and is called Danzai. It will first air on the NHK General television channel.

Then it will reach video-on-demand services such as Crunchyroll and Funimation, which have already confirmed that they will have this anime in their catalog. All that remains is to wait and see if by chance before its premiere any more information appears.

Destiny 2: How to Get a Shotgun without Remorse (God Rolls)