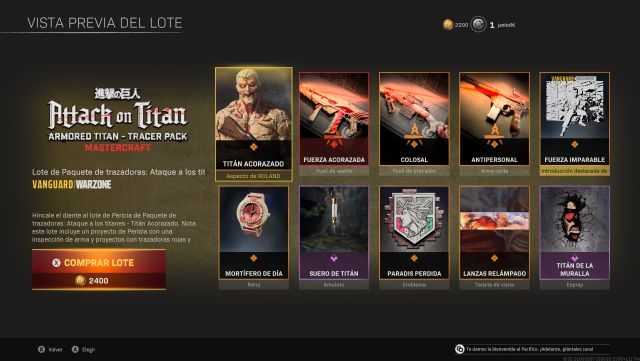 Shingeki No Kyojin: Attack on Titan and Call of Duty Warzone are collaborating to bring Titans to free-to-play battle royale, as well as Vanguard. Become a Titan. Shingeki no Kyojin, better known in these parts as Attack on the Titans, joins the Call of Duty universe. The team offers a set of cosmetics that will allow you to dress like a true Titan in Warzone and Vanguard. We tell you its price and what it contains.

The package is available in both Call of Duty: Warzone and Vanguard at a price of 2400 COD points, which in exchange is equivalent to about 19.99 euros. It is the equivalent of the operator lots, that is, the ones that incorporate the most objects into the inventory.