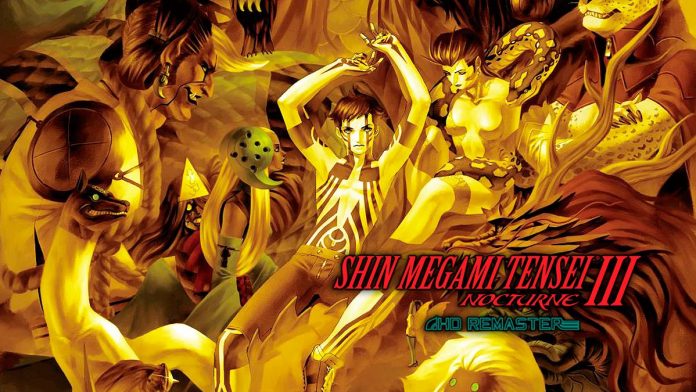 Shin Megami Tensei III: We tested the first two hours of the final version of Shin Megami Tensei III on its return in HD format.Atlus is, without a doubt, one of the biggest Japanese RPG developers of all time. Throughout more than three decades of history, he left a huge amount of unforgettable works in the Japanese market, although it is true that in the West it took him more to make his way and get to stand out as he deserved. The problem, to a large extent, lay in the markedly Japanese style of their productions, both at the level of narrative and designs and at the level of gameplay and style of play. Not surprisingly, much of his works are very demanding and require significant patience that, until very recently, Western users were not very prepared to accept.

In fact, despite the fact that Atlus always told deep and elaborate stories, with exquisitely developed characters, access to his works was quite complex due to the playable part, in such a way that excellent franchises remained as niche works for a minority audience . However, little by little they found the key to facilitate access to their works to everyone and, in recent times, they have ceased to be a niche company to become a company that monopolizes prizes with each production and to which players are paying more and more attention.

Possibly, the clearest evolution of the company itself can be seen in the Persona series, which went from having a first trilogy (the first game and the two parts of Persona 2) very niche and unknown even today to, with Persona 3, start to broaden horizons and, after the great success of Persona 4, finish exploiting the formula with a Persona 5 that had multimillion-dollar sales and countless international recognitions and awards.

However, there are numerous successes and great games of the company in recent times, beyond Persona: 13 Sentinels, Catherine, Dragon’s Crown, Odin Sphere, the Etrian Odyssey franchise, Tokyo Mirage Sessions, the Devil Survivor … And, in this moment in which the fans of the company eagerly await Shin Megami Tensei V, take the opportunity to recover one of their greatest masterpieces, especially because it went unfairly unnoticed at the time.

Shin Megami Tensei III Nocture HD Remaster is, as its name suggests, the third installment in Atlus’s flagship franchise, from which virtually all of its classics are derived (the Persona series, for example, belongs to the Shin Megami Tensei). It is curious, yes, that now it does appear in the title, which is the third installment, since originally the version for PlayStation 2 was launched without that number and only as Shin Megami Tensei: Nocturne, due to the little relationship that it had with the previous two.

We have been able to play in the first hours of this remastering, after having played the original in 2005 (a few years after launch), and it is necessary to highlight first of all the breath of nostalgia that comes from reliving this story with these characters. Those of us who enjoyed the original work at the time find here a very satisfactory high definition adaptation that takes care of all the important details: improvement of textures, light and shadow effects, environments, characters and more defined objects … It is true that it does not seem that great follies have been committed on a technical level and that fulfills what the title itself promises, since it is eminently a simple remastering of the technical aspects of the original base game.

However, it is fair to admit that you feel great and that you do not need much more. The art style of the game is adapted to the limitations and technical demands of PlayStation 2 and any profound modification of its basic elements would alter the sensations and the own spirit that Nocturne has. So much so, that the simplicity of the settings by modern standards does not take long to go unnoticed given the spectacular nature of its narrative and its characters. We do not want to go into too much detail so that those who could not enjoy the game at the time discover first-hand all the secrets that the production hides.

To give some basic touches of the staging, the Shin Megami Tensei franchise (and the vast majority of its ramifications) revolves around the same concept that is also the basic pillar of the narrative of this installment: Tokyo has been devastated by a cosmic conflict between good and evil and the protagonist, a simple high school student, is caught in the middle. The peculiarity of Nocturne is that he is turned into a half demon and his goal will be to understand why he has undergone that transformation. The actions of the player will determine various possible outcomes of the game, in such a way that the rebirth, life or death of the city of Tokyo itself will be in our hands.

The fighting in turn, a basic pillar

In the same way, Nocturne also makes use of another basic pillar, the turn-based combat in which the key is to always discover the weaknesses of the enemies to prevent them from counterattacking. In addition, recruiting demons to join your cause and fight alongside you will be essential in the game, with the possibility of merging them into more powerful forms.

This was precisely the most tricky point of the game at the time, since it was relentless in the difficulty of the combats and required a significant investment of hours to understand all the weaknesses of the enemies and have equipment sufficiently adapted to the circumstances. and powerful enough to stand up to rivals. For this reason, we consider the difficulty selector of this remastering in high definition to be a great success, in such a way that there will be difficult mode, normal mono or Godly mode, designed for those who want to eminently enjoy their wonderful narrative and do not perform well in the battles. The level of difficulty can be changed at any time, in such a way that we can adapt our gaming experience to our needs at all times.

Red Dead Redemption 2 Mod Fills The Game With Snow For...