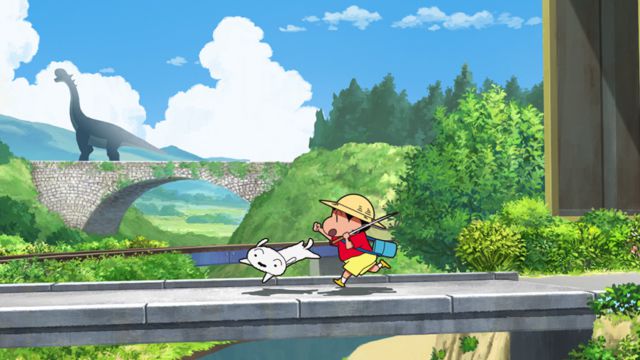 The Japanese broadcast of the Nintendo Direct featured one of the most ambitious works to date based on the famous character.

There was a video game that we did not see during the Nintendo Direct in Europe and the United States: Crayon Shin-chan: Ora to Hakase no Natsuyasumi – Owaranai Nanokakan no Tabi for Nintendo Switch. The publisher Neos Corporation and the developer Millennium Kitchen have presented a promising and precious adventure based on what is one of the biggest popular icons of manganime in Japan.

With graphics and a visual style reminiscent at times of an animated film, the title will narrate the adventures of Shinnosuke Nohara during a summer vacation. Kaz Ayabe, creator of the Boku no Natsuyasumi saga, is in charge of creating this world that is receiving such a good reception in forums and social networks.

As we see in the first video preview, we will be able to explore not only the center of the traditional Saitama of the series, but the surroundings of it, with forests, activities, adventures, mechanics such as fishing and gathering resources; characters with their own tasks… A title designed for those who enjoyed Boku no Natsuyasumi on PlayStation (2000) and PSP (2006); although it is a video game that never made it to the West.

We do not know if Crayon Shin-chan: Ora to Hakase no Natsuyasumi – Owaranai Nanokakan will appear in these lands. The title will go on sale in Japan in summer 2021.

Nintendo Direct is back: Nintendo Switch is reinforced in 2021

After a year 2020 marked by the pandemic and by Animal Crossing: New Horizons, it is time to look further. Nintendo Switch is in the middle of its life cycle, but the company wants the console to last longer on the market than usual because of its extraordinary form. With more than 79.87 million units sold in less than four years, the hybrid platform is growing faster than the Wii.

All in all, events like this Nintendo Direct allow us to see what’s beyond the previously confirmed ones, which we remember are exclusive titles like Bravely Default II on February 26, Monster Hunter Rise on March 26 and New Pokémon Snap on April 30. For Nintendo Switch to have a longer life than what was the norm in the company, many exclusive games are needed, and little by little we are learning what awaits us for the next few months.

With the 25th anniversary of Pokémon just around the corner, it is already confirmed that between February 22 and 28 we will have announcements related to the main saga.

You can see all the confirmed announcements during this extensive Nintendo Direct of February 2021 at this link; To highlight, works such as The Legend of Zelda: Skyward Sword HD, Mario Golf: Super Rush, Splatoon 3 or the expected date of No More Heroes III.

Redmi Note 11 Pro Plus is introduced! Here are the features...