Home Entertainment Shikimori is Not Just a Cutie: 10 Things We Like about Izumi... 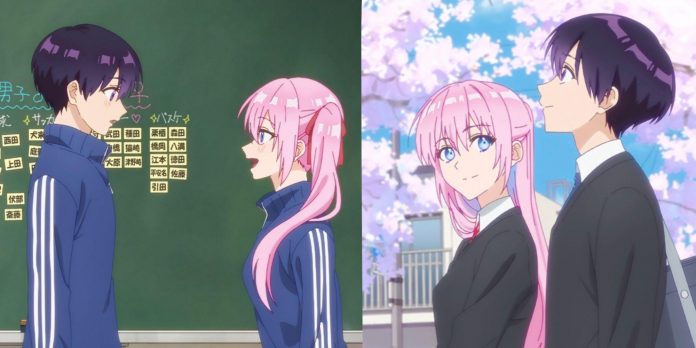 The following contains spoilers for Shikimori’s Not Just A Cutie, available to stream on Crunchyroll.

Yuu Izumi is a bright and friendly, albeit awkward, young teenager. On the other hand, his girlfriend, Shikimori, is the total opposite: athletic, stubborn, and assertive. However, what about this couple makes them so perfect?

While Izumi is clumsy and overall riddled with bad luck, Shikimori is the opposite. She is outgoing, confident, cute, strong, and bold. In contrast, Izumi is awkward, bashful, and always seems to find himself in trouble. He also has a tendency to lose his wallet and trip over his feet.

On the contrary, Izumi excels in cooking, unlike Shikimori. For example, when Shikimori attempts to cook shrimp for Izumi, she ruins the dish with a mess of seasonings. Through this scenario, the audience discovers that she can’t cook or bake.

9 They Balance Each Other Out

With their differences, Izumi and Shikimori balance each other out. Izumi’s unassertiveness and Shikimori’s confidence fit together like pieces of a puzzle. Izumi’s tendency to trip over his feet, drop things, and injure himself is counterbalanced by Shikimori’s protective and defensive nature. In the same manner, Shikimori’s shy demeanor is balanced by Izumi’s kindness and generosity for everyone he meets.

RELATED: Shikimori’s Not Just a Cutie Episode 3 Review – A Good Adaptation of Events

Additionally, in Episode 10, “The Desire to Win,” the audience gains another glimpse at Izumi’s clumsiness when he is chosen to participate in the ‘boys and girls mixed relay’ for their school’s athletic festival. Izumi’s best friend, Inuzuka, reveals that while Izumi is not a slow runner, he does fall a lot. This is entirely unlike Shikimori, who is athletically inclined. Her participation in the boys and girls mixed relay (along with their friends) helps balance Izumi (and Hachimitsu), who are both not athletes whatsoever.

8 They Are Supportive Of Each Other

Along with completing each other, Izumi and Shikimori are continuously encouraging and reassuring of the other person’s likes, goals, and preferences. For example, after Izumi supports his girlfriend’s failed attempt at cooking, Shikimori promises she will improve and learn how to become a better cook. Fortunately, she keeps her promise to him by taking cooking classes with his mother.

Meanwhile, when Izumi gets sick and stays home from school, Shikimori continues to support him by flooding him with text messages reminding him to take his medicine, stay warm, and eat warm foods. Although she can’t see him, she is always thinking about him, which seems obvious due to the several messages she has sent him.

7 They Are Devoted To Each Other

Shikimori and Izumi’s devotion to each other is another sweet aspect of their relationship. One of their classmates, Kamiya, harbors a crush on Izumi and is devastated to discover that he is taken. However, the couple’s devotion to one another is so strong that it does not entirely phase them. Rather, Shikimori does her best to comfort her.

In another instance, Izumi asks his friend Inuzuka to take class notes for him while he is stuck at home resting. This continues to provoke jealousy on Shikimori’s side as she believes Inuzuka is out to steal her boyfriend. This one-sided feud between her and Izumi’s best friend illustrates how devoted she is to her boyfriend. The fear that Inuzuka would steal him away (which he wouldn’t) is an indication of a mix of two things: a very new relationship where both people who clearly like each other still feel shy and insecure.

When the couple makes plans to see the fireworks in Episode 6, “With Fireworks Comes Summer’s End,” Izumi attempts to win a prize for Shikimori in the shooting game. Unfortunately, he misses the target several times and fails. However, when it is Shikimori’s turn, she hits the mark several times and wins the prize, gifting it to Izumi. Naturally, this surprises both the latter and the game operator.

Additionally, in the next episode, “Cultural Festival,” Izumi is sewing with a couple of his female classmates for his school’s cultural festival. Generally, sewing is viewed as a ‘feminine’ activity, and perhaps this is why the anime chose to make Izumi do it instead of Shikimori. Regardless, the swapped gender roles work perfectly in their relationship, especially because they feel so comfortable with it.

5 They Are Shy With Each Other

Their shy demeanor at the beginning of the series reflects their sweet infatuation with one another. As they continue getting to know each other, this shy undertone remains, emphasizing a sense of innocence and purity. In addition, Shikimori and Izumi maintain a sense of shyness toward each other during their relationship that one could only describe as wholesome.

During Episode 4, “How They Each Feel at the Start of Summer,” Shikimori feels understandably shy about wearing a new swimsuit in front of Izumi. However, seeing him stare at a poster of a woman modeling a bikini fuels her to buy a nice swimsuit. Likewise, Izumi appears to feel shy whenever he simply catches his girlfriend’s gaze.

4 They Make Sacrifices For Each Other

Shikimori and Izumi’s relationship is cute because, along with respecting each other, they don’t think twice before making sacrifices for one another. For example, after Shikimori cooks for Izumi (and messes up), her food makes him fall onto his knees in nausea when he tries a bite.

However, he does not let this deter him as he continues to eat more to make his girlfriend feel better, shocking her and their friends.

3 The Way They Think The Other Is Perfect

Despite Izumi’s bad luck and clumsiness, Shikimori believes he is perfect. Similarly, Izumi considers Shikimori to be perfect, despite her tendency to save him. Many boys would see this quality as emasculating.

However, Izumi believes otherwise. In fact, he believes this is the perfect quality for a girl for him because it is what makes her Shikimori.

2 The Way They Protect Each Other

There is nothing sweeter than the way Shikimori protects (and, in some cases, stands up for) Izumi, who is prone to causing accidents. Although Shikimori typically protects and avenges Izumi in most instances, she is not the only one in their relationship to protect her loved one.

For example, when Shikimori’s sandal breaks in Episode 6, Izumi is determined to carry her to protect her bare, blistered feet from the rough ground, despite Shikimori’s protests. In his own way, Izumi protects Shikimori just as much as she protects him.

1 They Always Make Time For Their Friends

When two friend group members begin a romantic relationship, it can become challenging for the overall friendship group. However, Shikimori and Izumi manage to balance their relationship and friendships, even involving them in many activities and outings.

Despite their infatuation with one another, Izumi and Shikimori always ensure they make time for their close friends.

Shikimori’s Not Just A Cutie is available on Crunchyroll.