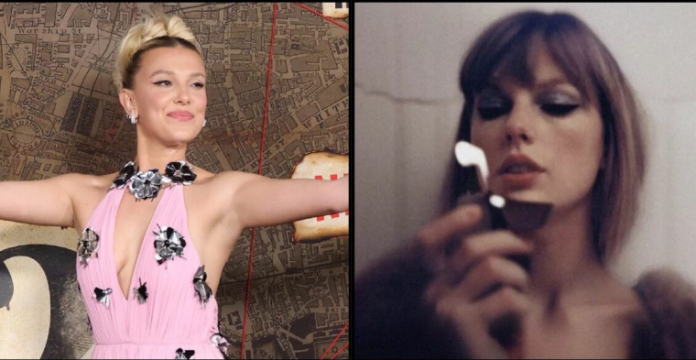 On October 21, Taylor Swift released her new album Midnights. A little over ten days have passed since that fateful day, and it seems that the whole world is absorbed in her music. Besides her devoted army of fans, several celebrities are also celebrities. One of them is 18—year-old British star Millie Bobby Brown.

In a recent interview, the star of “Stranger Things” openly expressed her love for T-Swizzle and her music. It seems that fascinated by Swift’s newest album, the young actress even revealed her favorite titles from the collection.

Millie Bobby Brown is sucking up to Taylor Swift and choosing her favorite songs from her album Midnights.

Just a day after the premiere of the movie “Enola Holmes 2” in New York, Millie Bobby Brown gave an exclusive interview to Entertainment Tonight. In one clip, which is walking on the Internet, the young actor can barely contain his adoration of Taylor Swift and excitement about her new album Midnights. When asked how many times she listened to the compilation, Brown said that she constantly listens to Tay Tay in the car and on the plane.

The host then asked Brown to choose her favorites from the album. While Brown’s instant impulse was “Bejeweled,” she later even added “Vigilante Sh*t” to her selections. She even felt that the song Bejeweled reflected her image from the red carpet of Enola Homles 2. She referred to the flowers attached to her gorgeous pink dress that mirrored the jewels.

“You know, this song was my theme last night,” said star Enola Holmes.

Midnight was a huge success all over the world. In fact, Taylor Swift made history by becoming the only artist to take all 10 places in the top ten on the Billboard Hot 100. Although Drake was close to it last year, the Canadian rapper was one place short. This is a true testament to Swift’s impeccable talent. In addition, the Bad Blood singer has also surpassed Kanye West’s fortune.

What’s your favorite track from Midnights? Let us know in the comments below. Enola Holmes 2 will premiere on Netflix on November 4. In the meantime, you can always refresh yourself by watching the first part.

BLACKPINK The Movie: Lisa Talks About Her Emotional Scene Included In...