Home Entertainment “She should be punished” — Henry Cavill Talks About How Millie Bobby... 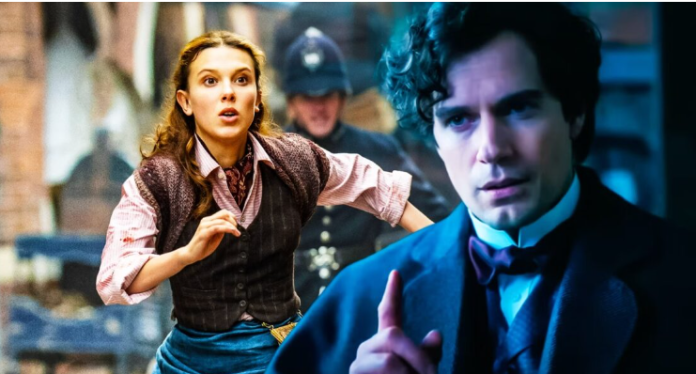 We all know about Millie Bobby Brown and her obsession with making videos for TikTok; she tried to make them on the set of Enola Holmes. It was perfectly normal when she made them and didn’t include Henry Cavill. But as soon as the actress caught her on-screen brother Sherlock on camera, he punished her for teasing him.

When the original Netflix movie “Enola Holmes 2” was released, fans of Cavill and Brown can’t stop admiring their connection. In any interview, whenever we see Henry Cavill and Millie Bobby Brown talking, we feel their connection. And looking at Enola in the film, we can well imagine how the 18-year-old actress teases the actor from The Witcher. But what punishment did she get for teasing Geralt of Rivia?

In the film, Henry plays Sherlock Holmes, the older brother of Enola Holmes. Just by looking at Cavill, we can understand how heavy he must be, so when Millie teased Cavill on the set of their movie together, he used his weight to get back at her, as Cavill said, “She deserved some punishment.”

As Sherlock himself said, he conceded quite a lot during the scene as punishment, where he had to play a drunken character. And as Enola says about Sherlock in the movie in the same scene: “You’re heavy, like a dead horse on another dead horse.” Viewers can easily imagine that the man who played Superman and Geralt from Rivia could be as heavy as described in the film. Millie had to face all this trouble because she teased Henry with a threat to make a video about him in TikTok.

Well, good luck, Enola, in the punishments to come, because your fans know that you can’t stop teasing Sherlock. Meanwhile, Cavill admitted that he also made fun of Brown. That’s how the sibling bond works.

Do you also have this connection with your siblings? Do you also tease them just to fight later? Tell us all about it while you stream Enola Holmes 2 here, only on Netflix.

Atypical: 8 similar series to watch after the season finale

Riders Republic Has Gameplay Video Leaked On The Network