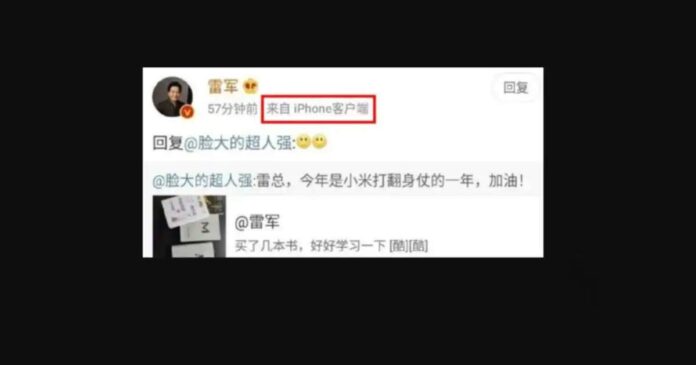 Xiaomi CEO Lei Jun wanted to share a photo about the books in Weibo, but Jun made it with an iPhone. Xiaomi has attracted fans’ reaction.

Weibo has a feature similar to Twitter. Due to this feature, the device on which the sharing is made is detected and added to the sharing. So if you share using an iPhone, this detail can be seen in your share. However, if you are the CEO of a company that rivals iPhones, this feature can be a headache. Therefore, the iPhone detail in a share of Xiaomi CEO Lei Jun did not escape the attention of Jun’s fans.

That CEO shared on iPhone
Xiaomi CEO shared a photographic recommendation that the book should be bought and read in a post on Weibo. However, this sharing attracted attention not with the articles in it, but with the phrase “iPhone” on the share. According to Weibo, Lei Jun shared it using an iPhone. So the CEO of Xiaomi preferred iPhone instead of a Xiaomi phone in his daily life.

This detail, which has not been overlooked by Xiaomi fans, has caused dozens of posts about Lei Jun. Almost all of the posts had reaction and disappointment to Jun. This feature, which reveals that companies have developed a new phone in the past years, revealed that this time Xiaomi CEO actually preferred a different brand of smartphones.

Event causing sharing removed with agenda
The event, which Xiaomi fans reacted to, triggered Lei Jun with an agenda in the internet world. Jun made the same share again by deleting his share with iPhone. This time, the Xiaomi Mi 10 Pro was used. However, this incident did not change the mind of Xiaomi fans.