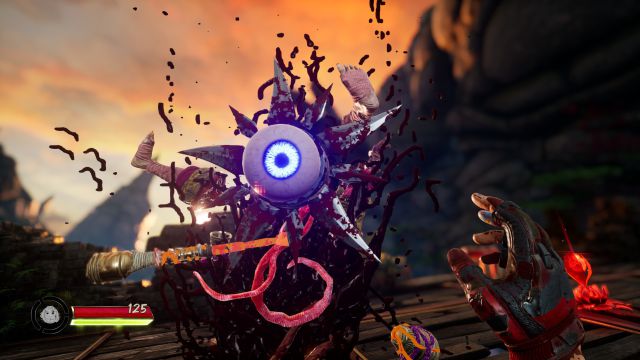 Shadow Warrior 3: We review Shadow Warrior 3, a spectacular first-person shooter video game set in Japan with a very satisfying combat system. In the 90s, the predominant genre of PC video games was popularly known as “Doom-type games”. If at that time one kicked a stone, 5 imitators of the immortal classic of id would come out from under it. That, in addition to giving us a myriad of first-person shooter video games, kicked off the battle of graphics engines in the world of digital entertainment. The Build engine, created in 1995 by Ken Silverman for 3D Realms, was one of the most mythical and prolific at that time, with several of the best classic exponents of the genre created with said graphic engine. The revolutionary, devastating and unrepeatable (much to our regret…) Duke Nukem 3D from 1996 was the great standard-bearer of the engine, which also spawned gems like Redneck Rampage, the tremendous Blood (which has a fantastic remaster for current digital platforms) and the no less magnificent Exhumed (known as Powerslave in the USA, and which received a wonderful remaster called Powerslave Exhumed a few days ago, also available on digital platforms). The legacy of the engine has lasted to this day, since the great Ion Fury of 2019 uses the Build engine, being a great game.

Shadow Warrior, released for PC in September 1997 for PC, was another of Build’s children. Created by 3D Realms and published by GT Interactive, it was a very ambitious title, which had between eyebrows and eyebrows the far from simple task of surpassing the great Duke Nukem 3D. The development of the title had begun in 1994, and he opted for an oriental setting to stand out from his competitors. The protagonist of it was the ninja warrior Lo Wang, who had to face the hordes of demonic beings that his boss Zilla had conjured to take control of a futuristic Japan. The title displayed a very sharp and black humor, and did not cut a hair neither with the gore nor with various risque elements. The oriental setting made weapons such as a katana or shuriken stars part of a varied and devastating arsenal. The title boasted an excellent level design, and introduced several technical advances in the genre, also allowing the use of vehicles completely freely at various times. Shadow Warrior did not reach the popularity of Duke 3D as intended, and generated mixed reviews, although mostly positive. Time ended up placing it as a cult classic in various sectors. You have the game available for free on both Steam and GOG, under the name of Shadow Warrior Classic.

The next stop on our journey takes us to 2009, the year the Polish studio Flying Wild Hog was founded. The independent developer based in Warsaw debuted in 2011 with the excellent Hard Reset, a first-person shooter video game with a futuristic cyberpunk setting, which successfully sought to revive the classic essence of the genre and mix it with interesting novelties (the Redux version of Hard Reset can be found for a couple of euros on sale, and we strongly recommend that you play it.) Such was the quality of this first title, that the independent publisher Devolver (synonymous with quality and originality with capital letters in everything they publish) commissioned the Poles made a reboot of Shadow Warrior, which would be released in 2013. The title successfully recovered the essence of the classic, being a hilarious first-person shooter with a totally classic flavor, which brilliantly adapts the adventures of Lo Wang to the times without giving up the hallmarks of the 1997 title. Such was the success, that in 2016 he would receive We are a Shadow Warrior 2, another magnificent title that shamelessly risked drinking the influence of the Borderlands saga, adding cooperative 4 and procedural scenarios in a semi-open world with optional missions.

And so, we finally arrive at this March 1, 2022 where Flying Wild Hog again launches this Shadow Warrior 3 that concerns us today, again with the quality seal of Devolver. They do so after the tremendous blow on the table that the id masters gave in 2020, when they set the new bar for the genre, the measuring stick that every aspiring must face. After Doom Eternal, nothing is worth anything in the fps genre. It’s not just about shooting anymore, it’s about mechanics, about giving the player tools and possibilities, about forcefulness. It’s about turning first-person shooters into an orchestrated symphony of lead, agile, elegant and frenetic. Shadow Warrior 3 tries to keep up with the onslaught with a superb combat system that we found delightful, but it falls short of the modern id classic due to its limited length and its scant content. The title has seemed hilarious to us, and it has kept us glued to the screen enjoying it in a big way, but sadly we have spent it almost in one sitting in barely 6 hours, and its limited content and its uninspired level design have ended up driving it away of the excellence to which it pointed in the first bars.