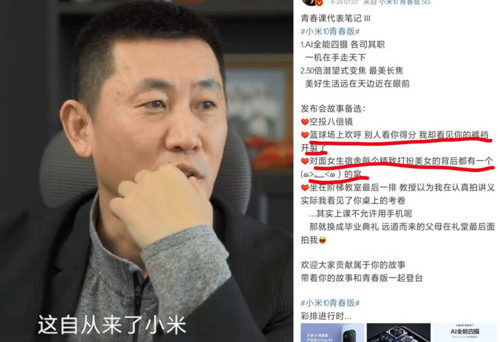 Chang Cheng, who left Lenovo at the beginning of the year and started to work at Xiaomi, sat on the agenda of China with a joke. While making a statement about the company’s new phone Mi 10 Lite Zoom, Cheng set up a sentence that humiliated women.

Chinese technology manufacturer Xiaomi is mostly subject to our news with its smart phones and other technological products. This time, Xiaomi, who comes across a slightly different subject, is spoken by an improper joke by an administrator. Undisputed joke, reacted by countless consumers, contained sexist elements on a sensitive subject.

This unpleasant development has the signature of Xiaomi’s Vice President Chang Cheng. Cheng, who left his position in Lenovo at the beginning of 2020 and transferred to Xiaomi, was criticized by a large audience with a sentence for women.

Xiaomi manager Chang Cheng, who is on the agenda with scandalous expressions
In the comments made by the Xiaomi manager, there were some jokes about how to use the 50x zoom feature of the Mi 10 Lite Zoom. One of Cheng’s jokes, simplified, “There is a room in every girls’ dorm where gossip squad (!) Also gathers if there are girls like models.” It was in shape. Although it is difficult to understand what is meant in this sentence in the first place, it is thought that Cheng encourages people to take pictures secretly using the 50x zoom feature.

Cheng’s exceedingly these sentences were reacted by all users in Weibo. Therefore, this situation directly damaged the Xiaomi brand. Because almost all Weibo users in China had somehow coincided with Cheng’s explanations, and a Xiaomi manager was at the center of the criticism, implying that he could ‘be used for voyeurism’ with or without being aware of the 50x zoom feature.

This pointless joke exploded to Cheng for “$ 14,000”
Xiaomi manager first removed the sharing with the incident sitting on the Chinese agenda. After making some statements on this subject, Cheng apologized and explained that all criticisms were justified and accepted all criticisms. Not satisfied with this statement alone, Cheng announced that he made a donation of 14 thousand dollars to a non-governmental organization.

This incident also damaged Xiaomi’s brand value. So this event also mobilized Xiaomi officials. In the statements made from the official Weibo account of the company, it was once again apologized about the issue, while Xiaomi said it would speed up efforts for staff development. Time will show how consumers will be satisfied with these moves and whether they will forget this event.

Are basic theories about the past and death of the Ben