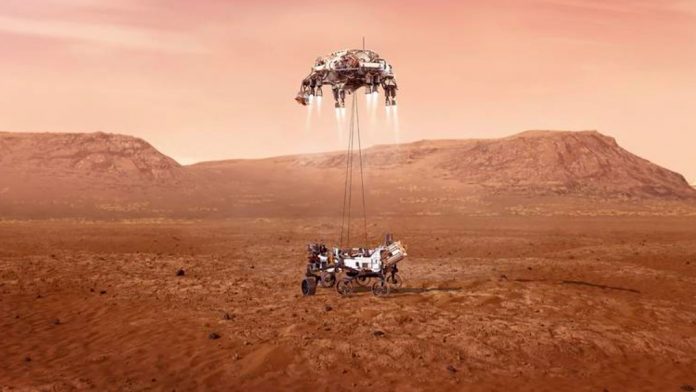 Nasa will on Thursday land a rover on Mars to investigate whether there has been life on the planet. THE employees of the American Space Administration (Nasa) will of course bite their nails on Thursday night Danish time.

Just before 10 pm, the Nasa spacecraft Perseverance will finally land on Mars, after traveling six months and almost 500 million kilometers on its journey towards the planet.

The unmanned mission will, via the spacecraft, investigate, among other things, whether there has been life on the planet.

But before that happens, the vehicle – also referred to as a rover or robot – must first land on the planet’s surface in the large crater Jezero.

A landing that is not easy. It lasts seven minutes, and it is described as “the seven minutes of horror”, says Anja Cetti Andersen, professor and astrophysicist at the Niels Bohr Institute.

In addition, it takes 11 minutes for the signal to reach the ground, creating voltage.

– It’s because you just sit and wait. We only know if it has gone well when it has happened. It will be filmed, but we will only see it when we receive the signal, she says.

The vehicle must be slowed down from about 20,000 kilometers per hour to normal walking speed at the surface of Mars. Along the way, it descends through Mars’ thin atmosphere using a parachute, before brake rockets get it all the way down to speed. Only about 40 percent of all missions sent to Mars by any space organization have been successful, according to Nasa.

There is a risk that the landing will go wrong. But because Nasa succeeded in 2011 with the Mars rover Curiosity, Anja Cetti Andersen also believes that it will succeed this time.

– We can be reasonably sure that it will land on Mars. The question is whether it lands so controlled that it can also drive when it has landed. That’s what’s exciting.

One is whether the parachute unfolds, and Mars’ atmosphere is only one-tenth the Earth’s atmosphere. That means a parachute isn’t as effective at braking, she says. The big goal for Nasa is to send a human to Mars, but it requires that you are sure that the astronaut can land softly, says Anja Cetti Andersen.

– For the last 25 years I have said: “It will happen within 25 years”. But I think now it will be within the next 25 years. We have the technology to make that possible, she says.

The rover, which is equipped with 19 cameras and 2 microphones, is the fifth Mars robot that Nasa sends to the planet.

The Jezero crater, where it is to land, is believed to have been covered with water and is therefore a good place to look for life. Denmark is also represented on the mission. One of the 19 cameras has been developed by Danish DTU Space.

He is a professor and head of department at DTU Space and is in charge of DTU’s contribution to the mission. He says that “if everything goes well and it lands, it is incredibly big for Denmark”.

I will definitely bite my nails, because there are so many things in the landing that can go wrong, he says.