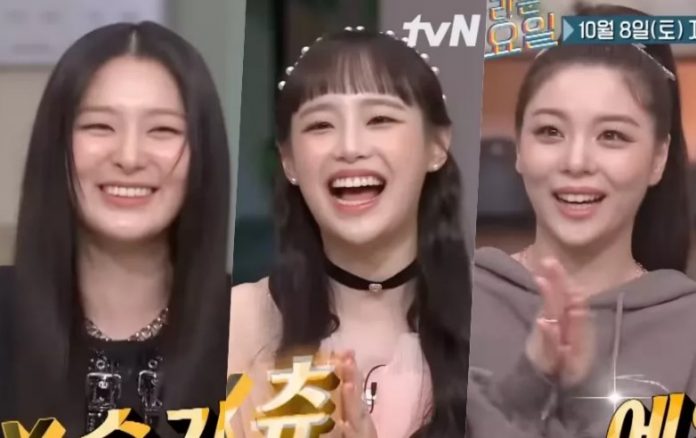 Seulgi from Red Velvet, Chu from LOONA and Ailie will appear together in the show “Amazing Saturday” on tvN!

On October 1, the popular entertainment show showed a brief overview of the upcoming episode, in which three singers will be guests.

The newly released preview begins with Ailie worrying that she won’t be good at the show’s signature guessing game, admitting, “I can’t figure anything out… and I don’t have a good memory either.” However, to her own surprise, she turns out to be a reliable ace when the games begin, and soon the actors are reverently repeating her name.

Meanwhile, Seulgi announces that he is presenting his new solo debut track “28 Reasons” for the first time during filming. Although the preview doesn’t spoil the song, the cast members react with awe, exclaiming, “[Seulgi] is so cool!”

Finally, Choo reveals that the program’s writers told her to rely on Kim Dong Hyun during filming. Later, after seeing her enthusiastic reaction to small events, Kim Dong Hyun jokes: “I think this reaction escapes out of habit.” The actors also continue to admire how cute Chuu is dancing.

The next issue of “Amazing Saturday” will air on October 8 at 19:30. KST. In the meantime, check out the new preview below!

What happened to the BTS contract?

These are possible remaining seasons of the Netflix series