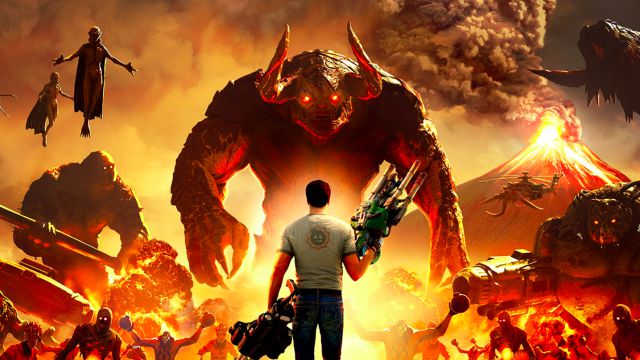 Serious Sam 4: The game debuted on PC in 2020, but the console version had been missing until now, when it comes out for PS5, Xbox Series, and Game Pass. Without warning and like someone who does not want it, Serious Sam 4: Planet Badass appeared yesterday, December 7, 2021, in the digital stores of PS5 and Xbox Series X / S, where it is already available for purchase and immediate enjoyment (at a price of 39.99 euros). But not only that, but the game has also made an appearance on Xbox Game Pass still not being announced anywhere (would you plan to surprise at The Game Awards 2021?). Be that as it may, it becomes a new and recommended option for lovers of first-person action, and especially those who like large doses of madness and sarcasm.

The game serves as a prequel to Serious Sam 3: BFE and although it came out on PC in September 2020, its console version had remained in limbo, eternally postponed. It is true that Serious Sam 4 did not have great notes, but these do not mean that it is a frantic FPS full of personality in which, as in the rest of the saga, we have to defend humanity by committing a delicious alien genocide. The title proposes us to immerse ourselves once again in the skin of Sam “Serious” Stone, who must arm himself to the teeth (not only with weapons, but also with jokes), to distribute tow among all kinds of monsters and creatures. Also this time it includes online multiplayer for up to four people, multiplying the chaos and fun.

Microsoft’s subscription service aims to leave 2021 through the big door. Serious Sam 4: Planet Badass is not your only surprise for this final stretch of the year and in the coming days it will include the following list of games:

The X-Men have Secretly Named Their Most Infamous Artist