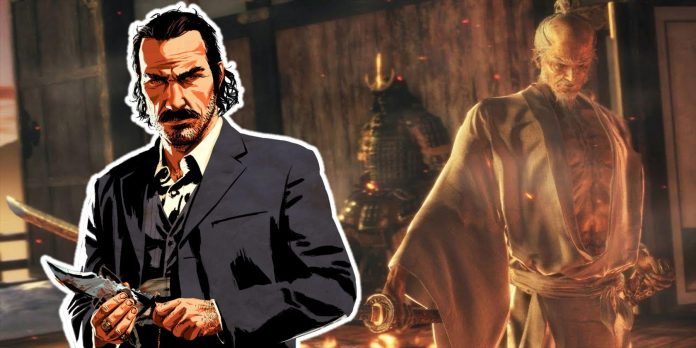 Red Dead Redemption 2 from Rockstar Games and Sekiro: Shadows Die Twice from FromSoftware are not so much related to each other, but one TikTok user saw an opportunity to combine them in a rather unique way. The first is a western third-person shooter, in which a romanticized narrative of brotherhood and betrayal, and the second is a hardcore Soulslike with a distinctly eastern influence, but thanks to fashion, they are surprisingly well combined with each other.

In TikTok, published on September 11, the user jamezwitaz demonstrated the Sekrio: Shadows Die Twice mod, which replaces the titled shinobi with Dutch Van der Linde from Red Dead Redemption 2. It is clear that he is going against Isshin Ashin, who can be encountered if the player decides to side with the Owl near the end of the game, Dutch, seems to be holding up against a fencing master. This is even more impressive by the fact that he is fighting Isshin with a crude axe, and also has a shotgun on his back, which he does not want to use.

If the Sekiro: Shadows Die Twice mod had been a little more realistic, the Dutchman Van der Linde from Red Dead Redemption 2 would not have had a chance. No matter how persistent he is, the rapid skirmishes on the border that he is used to cannot compare to the protracted clash of blades seen in Ashina. Perhaps it has something to do with the plans that Dutch constantly talks about in the game. However, jamezwitaz showed off a bunch of non-Red Dead related content.

The uploader seems to have a penchant for anime; quite a lot of their content showcases Sekiro mods: Shadows Die Twice and Elden Ring, based on hits like One Piece and Demon Slayer. The post from September 1 stands out as particularly memorable, as it demonstrates a super-civilized mod that replaces the Elden Ring player character with a Mask from Demon Slayer in a mask. Other mods featured on jamezwitaz’s TikTok account introduce the main characters of One Piece and Final Fantasy to the Sekiro: Shadows Die Twice universe.

No matter how inappropriate Dutch Van der Linde, Roronora Zoro and Cloud Strife may seem in FromSoftware games, such mods are often vital to the legacy of the game. The long-known game The Elder Scrolls 5: Skyrim from Bethesda probably wouldn’t have been able to achieve its decade of dominance in the RPG space if it wasn’t so easy to modify, and hopefully TikTok users like jamezwitaz will keep these games in the spotlight for a long time.