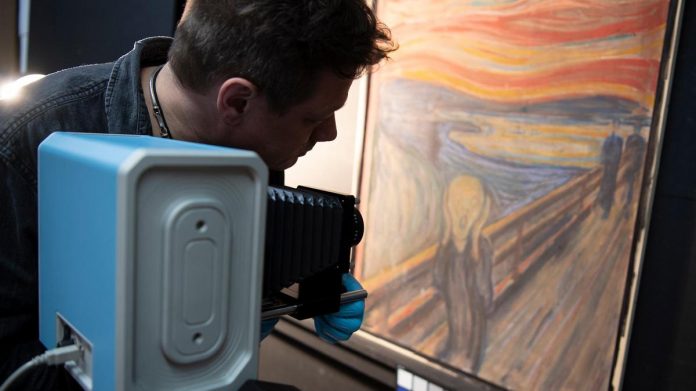 An inscription in the upper left corner of the ‘Scream’ painting, one of the most important works of art in the world, has been a mystery in the art community for a long time. The author of the article could not be found, and the National Museum of Norway has confirmed that it was written by Edward Munch after recent reviews.

The Scream painting by Edvard Munch, one of the most famous paintings in the world, has been causing debates in the art community for many years. Whether a sentence written in tiny letters in the upper left corner of the painting was written by Edvard Munch or by a vandalist who wanted to damage the artwork could not be solved.

The painting was reviewed again, and the National Museum of Norway confirmed that it was written by Edvard Munch and announced that the famous painter may have wanted to add such an addition to his painting during periods of psychological distress.

The following statements were included in the aforementioned sentence; “It can only be drawn by a madman.” Along with the painting, this article has been studied for a long time and the art community was divided on this subject. The first view was that Edvard Munch, whose life passed with mental illnesses, got angry in the first periods of the painting and made such an addition to the painting.

In the second view, it was claimed that this text in the Scream table was added by a vandalist when the painting disappeared in the 1990s. The technologies in possession did not allow for the specific date of the writing to be revealed, but the Norwegian National Museum has launched a new study of the painting using an entirely new technology that incorporates infrared rays.

5 Idols That Have Shown Their Support After The Outbreak Of...