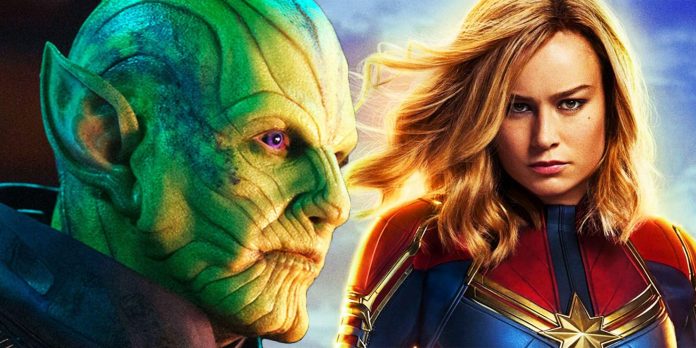 The MCU Phase 5 series Secret Invasion can justify the Captain Marvel twist that depicted the Skrulls as the good guys. Captain Marvel’s infamous Skrull twist irked many MCU viewers who were familiar with Marvel Comics’ Kree-Skrull War and “Secret Invasion,” which originally portrayed the Skrulls as a spacefaring empire that is just as bad if not worse than the Kree. However, the MCU movie might have just been setting up the best possible long-term story arc for the Skrulls – not just in Secret Invasion, but throughout the entire MCU Phase 5 slate.

The announcement of Secret Invasion in Comic-Con 2022 has rekindled the debate about which are the better Skrulls: the good ones from the MCU or the evil ones from Marvel Comics? In the MCU, Skrulls are refugees from a war that was started by the Kree, vilified by Kree propaganda as evil, shapeshifting invaders. Though the same can be said of Marvel Comics’ Skrulls, the Kree’s description of Skrulls is mostly accurate in the comics. Throughout the Skrulls’ long comic book history, there were very few Skrulls who weren’t actively malicious to those they encountered.

Secret Invasion can still stay true to how Marvel Comics depicted Skrulls, even without retconning anything from Captain Marvel or anywhere else Skrulls have already appeared. Considering everything that’s already been established about the Skrulls, the MCU’s Secret Invasion – Marvel Studios’ first crossover event – has everything it needs to justify why Skrulls weren’t evil in Captain Marvel. If Secret Invasion sees Skrulls fighting for and against Earth, then it might just settle the debate and prove that sometimes, the MCU can actually do it better than the source material.

Why Captain Marvel Changed The Skrulls

Marvel Comics’ “Secret Invasion” is one of the most prominent story arcs in comic book history, and Skrulls being the good guys in Captain Marvel helps in surprising viewers already familiar with the lore. Indeed, it’s entirely possible that Captain Marvel’s infamous Skrull twist is just a set up for them to turn evil in Secret Invasion. Another possibility is that the predominant existence of non-evil Skrulls can soften the blow when Secret Invasion finally reveals that Carol Danvers herself is a Skrull.

Apart from the fact that Captain Marvel is highly likely to be one of the many existing MCU characters in the Secret Invasion crossover, the Kree-human hybrid could be revealed to be a Skrull sleeper agent. This was the case with Mar-Vell in his “Secret Invasion” comics story arc, and just like how Mar-Vell still decided to side with Earth even though he was actually a Skrull, Carol Danvers could do the same in Secret Invasion. In fact, Danvers dealing with confusing memories in Captain Marvel was similar to how the Skrull sleeper agent Khn’nr forgot that he was a Skrull and truly believed that he was the hero Mar-Vell.

In the MCU, the Kree empowering the creation of Captain Marvel could also be part of the long-term Skrull plan towards Secret Invasion. Moreover, Danvers being a Skrull doesn’t necessarily turn Talos and the other Skrull refugees evil. This could even play into Nick Fury’s Secret Invasion story arc and possibly even answer what Fury was doing during MCU Phase 4. Talos and Nick Fury could already be running counter-intelligence plans against the evil Skrulls, part of which is allowing Danvers to believe she’s not actually a Skrull – turning Captain Marvel into retroactive proof that not all Skrulls are bad. In any case, the MCU changing the Skrulls essentially allows Secret Invasion’s writers to pay due tribute to the source material without making their MCU roles predictable for long-time Marvel readers.

At its core, the evolution of the Skrull Empire in Marvel Comics is a metaphor for human imperialist/neo-colonial history, and Secret Invasion changing the Skrulls again would allow the MCU to depict them closer to this original intent. In the MCU, little is revealed about the Skrull save for them being refugees hunted and vilified by Marvel’s Kree Empire. In the comics, however, the ancient Skrulls were a peaceful race until the Celestials split the Skrulls into three races 100 million years ago. This resulted in a planetary war where the shapeshifting Deviant Skrulls decimated the baseline Skrulls and the Eternal Skrulls, giving rise to the Dire Wraiths, Skrull Mutants, and the intergalactic Skrull Empire. From there, the Skrull Empire waged war and conquered thousands of galaxies through infiltration and sheer military might. Combined with how Skrulls are already depicted in the MCU, adapting or twisting more of Skrull history from Marvel Comics can allow the MCU to develop potentially even better Skrulls than the comics throughout the Secret Invasion timeline.

This also opens the possibility of the MCU adapting Skrulls that used their powers for good in the comics. Though most Skrulls are evil, just like humans, there are rebels among the general population. This includes Professor X’s Cadre K, a team that fought the Skrull Empire, Mockingbird who was a Mutant Skrull sleeper agent that sided with Earth, and Hulkling who is the half-Skrull half-Kree child of Mar-Vell and the Skrull Princess Anelle. Secret Invasion could tip the scales by introducing more good Skrulls who could fight alongside Earth’s Mightiest Heroes.

Why Villainous Skrulls Are Good For The MCU

Secret Invasion may also turn the evil Skrulls into MCU Phase 5’s long-term villains, and this could fix the glaring lack of an overarching plot during the divisive MCU Phase 4. In Marvel Comics, “Secret Invasion” culminates with the Skrulls getting defeated, SHIELD getting dissolved, and the U.S. government refunneling SHIELD and Stark Tech resources to fund the Thunderbolts. This is mainly because the final blow to the leader of the Skrulls is dealt by Thunderbolts leader Norman Osborn, who becomes a public hero, but also then founds the Cabal/Dark Illuminati alongside Namor, Emma Frost, The Hood, the female Loki, and Doctor Doom. Meanwhile, in the MCU, Secret Invasion is the second movie in MCU Phase 5, while Thunderbolts is the last. It’s possible that Secret Invasion is only the introduction of an overarching story arc that will culminate at the very end of Phase 5 with Thunderbolts.

Secret Invasion also comes after Ant-Man and the Wasp: Quantumania, which has been confirmed to be the real MCU debut of Kang the Conqueror. As Kang the Conqueror is a suitable Thanos replacement, it’s likely that Kang will survive Ant-Man 3. This presents a more dynamic long-term plot for MCU Phase 5, as Kang the Conqueror, the evil Skrulls, and the potential reintroduction of Norman Osborn threaten Earth in very different ways. This scenario could allow Secret Invasion to introduce a more complex unifying plot for the MCU’s upcoming projects, fix MCU Phase 4’s issues, and maybe even allow the MCU to exceed the commercial and critical success of Avengers: Endgame in the near future.

The Big Bang Theory: 3 curiosities that only the most fans...