Home Entertainment Season 9 of “Flash” may give “Arrow” the right ending (but will... 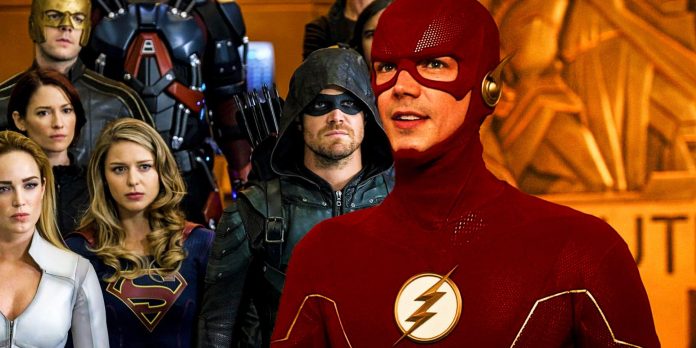 The Flash is concluding with season 9, and the series finale could be the Arrowverse’s final chance of having a proper ending. After years of being one of CW’s flagship shows, The Flash will return for a ninth and final season in 2023. The Flash essentially created what viewers now know as the Arrowverse as it was Arrow’s first spinoff, and now it has the chance to wrap up a TV franchise that has been airing for more than 11 years.

Although Arrow came to be as a spiritual successor to Smallville while borrowing from Nolan’s Batman Begins and The Dark Knight, the Stephen Amell-led show quickly found its own identity. Arrow succeeded in combining what makes a good primetime drama with an action-packed show, proving that superheroes could indeed work on TV without major workarounds as Smallville had. Arrow season 2 started to add fantastical and sci-fi elements into the story, which culminated with the arrival of Barry Allen in what served as a backdoor pilot for The Flash. Arrow and The Flash were soon followed by Legends of Tomorrow, essentially creating a DC universe on the small screen.

After several crossovers involving two or more shows, “Crisis on Infinite Earths” saw all of the Arrowverse series coming together into one massive crossover event that also celebrated characters and actors from previous DC movies and series. “Crisis on Infinite Earths” was also the starting point for Superman & Lois, and it combined all of the CW-created superhero shows into one universe, Earth-Prime, at least in theory. The TV event even featured Ezra Miller’s Flash, marking the first-ever crossover between a DCEU movie and an Arrowverse show. However, less than three years after “Crisis on Infinite Earths,” The Flash is the only remaining show in Arrowverse’s Earth-Prime. As such, The Flash’s final season has the opportunity, and, to an extent, the responsibility, of offering the franchise some sort of closure. That said, The Flash season 9’s focus should be on telling the best possible final Barry Allen story, which raises a challenge regarding how that can be combined with the mission of wrapping up the Arrowverse.

Flash Season 9 Will Be The Arrowverse’s Last

Up until Superman & Lois season 2 finale, it was assumed that the show was part of the Arrowverse despite the lack of major connections with other series. After the cancellations of Batwoman and Legends of Tomorrow, which had been preceded by the ends of Black Lighting and Supergirl, it seemed like the future of the Arrowverse was on the shoulders of The Flash and Superman & Lois, the latter of which had been well-received by its different structure and cinematography. Superman & Lois seemed like a new beginning for the Arrowverse, and yet there was always a feeling that the show was trying to distance itself from the franchise as not even Melissa Benoist’s Supergirl, Superman’s cousin, ever appeared.

Still, before Superman & Lois season 2 ended, the show had never done something to contradict the Arrowverse. That changed with a small but significant line heard during the finale, in which General Lane says that Superman is that Earth’s “only protector.” After the finale, the Superman & Lois producers confirmed that the show is not set on the Arrowverse’s Earth-Prime, making The Flash the only remaining show in the franchise. A Diggle spinoff series was announced in January 2022, but nothing concrete was revealed ever since, and now Superman & Lois has introduced a new, non-Arrowverse version of the David Ramsey character. Therefore, as of now, The Flash ending after season 9 also means the end of the Arrowverse.

As exciting as “Crisis on Infinite Earths” was, it happened at a time when the Arrowverse shows were already seeing a decline in ratings and overall reception. Shows like The Flash and Supergirl were starting to feel repetitive after several seasons, and even the always creative Legends of Tomorrow was already far from its best moments. “Crisis on Infinite Earths” was a perfect celebration of DC’s television history, and, in terms of scale, it was the peak of the Arrowverse. The crossover event also served as Arrow’s ending arc, and it could also have worked as the end of the entire franchise. If CW wanted Superman & Lois to be its own thing, then there was no point in setting up an Earth-Prime at the end of the crossover event. Also, if all of the CW shows involved in “Crisis on Infinite Earths” except The Flash would eventually end in a little more than two years, then the Crisis crossover could have been a much better ending to all of those stories.

Before being the end of the Arrowverse, The Flash has to be the end of Barry Allen’s story – a balance that is not so easy to achieve. This was a problem with which Arrow’s final episodes struggled, as the fate of characters like Oliver Queen and Felicity Smoak was tied with the outcome of the “Crisis on Infinite Earths” event. For a character without superpowers and that for long was grounded in a sense of realism, the end of Oliver Queen’s story felt way too disconnected from the rest of the show. This is something that can affect The Flash if the show’s final season focuses more on wrapping up the Arrowverse’s unresolved plotlines instead of just telling a Flash story.

Unfortunately, shows like Supergirl, Legends of Tomorrow, and Batwoman did not get a proper ending – but it should not be The Flash season 9’s mission to make up for that lack of closure. Instead, The Flash’s final season should streamline everything season 8 set up in order to conclude the stories of Barry Allen, Iris West, and everyone else. The Flash season 9 will only have 13 episodes, which makes that mission even more complicated.

How Flash’s Final Season Can Honor The Arrowverse

The Flash season 9 should be more than just an Arrowverse epilogue, but that does not mean it cannot somehow honor the franchise. It would be interesting if The CW could get the actors from previous shows to reprise their roles, not in a big crossover event but in an episode or two. The multiverse was already saved by Oliver Queen in “Crisis on Infinite Earths,” but there could still be a major threat against the universe for Flash and perhaps other heroes to fight against one last time. There could also be small references to previous moments from the Arrowverse and its characters, similar to how The Flash season 6 saw Barry receive Oliver Queen’s first Arrow mask.

Another possibility is that The Flash opts for a more intimate finale that highlights that Flash and all the other heroes will continue to fight past the end of the show, making it seem like the Arrowverse never truly went away. A flashback could also help The Flash’s ending celebrate the Arrowverse, and it would allow for Stephen Amell to reprise his role as Oliver Queen, the character who started it all, without retconning the end of “Crisis on Infinite Earths.” Last, The Flash season 9 could use an epilogue similar to the one from “Crisis on Infinite Earths,” in which every hero on Earth-Prime and their supporting characters are featured.

What happened to Ben at Umbrella Academy? Explanation of each theory