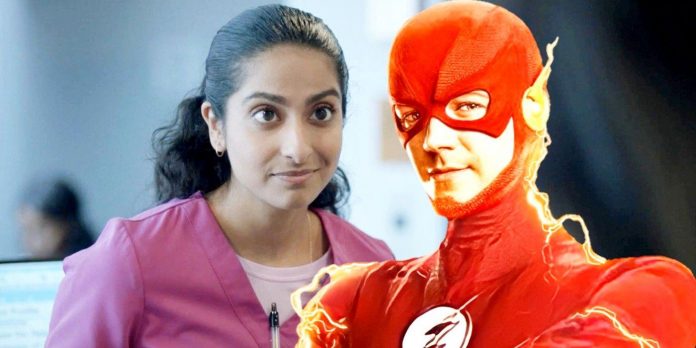 Attention! This article contains SPOILERS from the 8th season of the series “Flash”, the 17th episode

In season 8 of The Flash, Kausar Mohammed plays DC Comics speedster Dr. Meena Dhawan, also known as Fast Track, as a regular guest star. Since the beginning of The Flash, the Arrow drama has never shied away from using a few speedsters from the great DC comics lore. Whether it’s longtime characters like Wally West / Kid Flash, Jay Garrick or Bart Allen/Impulse, or new heroes like Godspeed, Flash introduced almost all speedsters at the moment.

However, the 8th season of “Flash” recently began teasing the appearance of another character-a speedster. In episode 17, titled “Keep It in the Dark,” Barry Allen discovers that there is a new meta-human in town with the same abilities as him. Initially, Barry thought it might be the work of Eobard Thawne, also known as the Reverse Flash, and that his nemesis had somehow regained his powers. While Tom Kavanagh made his final comeback as a villainous speedster after the events of Armageddon, Eobard wasn’t the speedster in question, but it was a completely different DC character.

Towards the end of episode 17 of Season 8 of The Flash, it was revealed that the new speedster was actually Dr. Meena Dhawan. After the episode aired, Deadline confirmed Mohammed’s choice for the role of Fast Track and that she would be a recurring guest star until the end of Season 8 of The Flash series. The first actor to bring to life a DC character whose Arrowverse iteration is described as follows:

“A titan in the scientific community who deftly balances her thirst for scientific experiments pushing boundaries with a strong moral compass. These qualities led Dhawan to discover a new way to democratize the gift of super-speed, which finally allowed all of humanity to reap the benefits. traditionally referred to as metahuman speedsters. But her discovery also sets Dhawan on a path to become something much bigger than she ever expected-a heroic alliance between Flash (Grant Gustin) and Central City’s newest exciting speedster, Fast Track.”

Season 8 of The Flash, episode 17 ended with Barry tracking down Mina before she revealed her real identity. Barry offers mentoring to Mina, realizing that she is just trying to figure out her new abilities. Mina has been teased throughout the 7th and 8th seasons of “The Flash” since her book “Quantum Gravity and the Universe” appeared briefly last year. Her company, Fast Track Labs, was also featured in season 8, including an episode in which Bart and Nora return to 2013 and meet her employee Avery Ho, who in the comics is a Chinese Flash.

The introduction of Mina in season 8 of The Flash is just one of several recent DC creations, especially from Joshua Williamson comics, that have made it into the Arrow universe. Although Mina officially starts as Fast Track, it remains to be seen whether season 8 or even the upcoming season 9 of “The Flash” (if she continues her recurring role) will hint at or even turn Mina into a Negative Flash, according to her original comic book storyline. . Since there are only a few episodes of Season 8 of The Flash left, time will tell where the series plans to go with Mina’s journey through the Arrow Universe.